I Finally Cut the Cord!

Well I did it.  I had been a Directv subscriber since 1992, but my bill was inching up every month it seemed to a whopping $108.  Mind you I only had the second level package and no premium channels.  What made me more mad was all of the offers for new subscribers that were dirt cheap (though with very long & hidden strings attached.)  They kept sending me "please come back offers" that looked good until you read the small print. 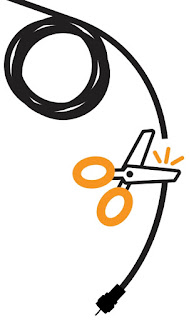 I work crappy retail hours and the DVR was nice for missed shows, but if I win the lottery, they now make them for antenna and internet TV for around $350.  When I got to thinking about $108 a month when 80% of what I watch is on NBC, CBS and ABC,  I just couldn't justify keeping it when my yearly contract was up.

Life without satellite has been livable with the exception of Ohio State football games.  Audra and I actually had to listen to the Oklahoma game on "Buckeye Radio" via her iPad (or sit in the car LOL!--couldn't find a "real" radio though we have several.)

I bought what was supposed to be a good antenna for my main TV (I already had one in my bedroom that was not that great.)  It does an OK job on the three local channels, as long as the weather holds and nobody walks through the room...but mostly we have been watching Netflix.  Audra is on a quest to watch all seven seasons of "Gilmore Girls" before the November revival.  She says she's been "Gilmore-d."

Since I won't be attending any late season games, I need to come up with a way to watch the Buckeyes, and hopefully TBDBITL peeks (That amazing catch behind the back of the opposing player in Oklahoma happened a few feet in front of Taylor who was standing on the sidelines getting ready for halftime.  How cool is that!!!) I think I will be giving SlingTV a shot.  All you need is ROKU, Amazon Fire Stick or Chromecast to get most of the cable channels you need (no local in our area.)  It's $20 a month for their base package, $30 for better and $40 for best--you can get Showtime, etc if you want cheap too.  I don't but it's a nice feature.  The best part is there is no contract and if you pay in advance for the first three months, you get your choice of several devices either free or deeply discounted.

I will definitely review this once I get it going.  Still going over my options right now though.

Well, will go watch part of the homecoming game (I hope) then off to work.  Have a great weekend!  Go Bucks!