More OH-IO!: A TBDBITL's-Eye View Of The Scarlet & Gray

Last week my Dad, Sister-In-Law, Audra and I went to our first Ohio State game as the family of "The Pride of the Buckeyes" OSU Marching Band.  My son Taylor has worked hard toward achieving his goal to someday being an I-Dotter for "Script Ohio."  Only upperclassmen and celebrity guests are allowed to have this honor, so it is still a few years out.

We went to the Western Michigan game and bought AA deck tickets that are reserved for band members' families seated right behind the band in the south end zone.  You are very close to the field and can actually make out faces, but you have to be there to support the band.  If you were expecting to watch the game, you wouldn't want those seats.  I must say I felt more "involved" in the game there as Block O is screaming behind us and the band is constantly playing in front with the cheerleaders and Brutus below in the end zone.  Usually, my seats are B or C deck.  But you watch the actual game on the "jumbotron" at the north end of the field. 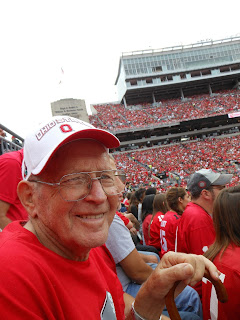 My dad is 85 years old and had a great time (except for not being able to see much of the game.)  He brought his cane and it was useful for tapping to the music and the shoulders of kids in front (non-band) who would stand for no reason.

The band has been good for Taylor for many reasons.  There is a lot of tradition and regimen that won't hurt him.  They get to travel to London, England in a few weeks for an NFL exhibition game.  They were invited because of their innovative shows designed with iPads (all members get one to use.)  If you aren't familiar with their shows, go to Youtube.com and there are tons of them.  I loved the "Wizard of Oz" one.

There are row dinners (members are not described by instrument, but by the row that instrument is assigned.  In the case of the sousaphones, it is K and L, known by all as KL Row (pronounced as kel-row.)  Though the band doesn't receive a cent of money from the athletic department (a real sore spot with me as they are as important to the game as the team), generous donors take good care of them.  Band members have to know the words to every school song as they are a "singing band" and also ambassadors for the university.  I love listening to the pre-ramp chants and music where they shout "We are Buckeyes...and we are Killer Nuts!" (Buckeyes are poisonous nuts.)  I am learning more about my alma mater now then when I went there in the 80s and it's fun to share it with Taylor.


Each of the sections has a mascot and KL Row's is a banana.  I had the pleasure of seeing it the entire game, instead of football.  Here is our view for most of the game...

Well,  I'd better get to a chore or two, so that will do it for this time!  For a lot more info on the band and it's tradition go to TBDBITL.OSU.edu.  They also have tons of CDs and downloads to purchase, or you can listen free on http://www.sgsosu.net/osu/songs/todays_songs.html  They even have the lyrics and the history of each song.   Thank you Audra for finding this!


PS:  See also "OH-IO!  A Buck-Eye's View of the Scarlet and Gray", and "We're BAAAAACCCK!" for other OSU stories.