'Ween Scenes From The 'Creek


Yesterday my friends Barb and Whitney joined me on a trip to Marie's Candies in West Liberty, Ohio.   If I make the right turns, it's about 25 minutes from home.   I know I've mentioned them before, but if you are in the area (near Bellefontaine) you really ought to stop in.  They always have festive decorations, great candy and samples!   We learned something as we pulled up.  Did you know that October 30th is National Candy Corn Day????

I really don't know of anyone that actually eats the stuff, but according to their signage (and I'm sure extensive research...LOL) it is said that 35 million pounds of candy corn is produced annually.  (I'm guessing 34.95 million pounds of it is thrown away....)  That equals 9 billion pieces which would circle the moon almost 21 times.  There are only 3.57 calories and no fat in this little morsel.

* Halloween introduced to America in the 1940s.
* 2/3 of Americans buy decorations, 2nd most decorated holiday
* 90% of parents sneak candy out of their children's treat bag
* Three billion dollars a year spent on Halloween merchandise.
* 99% of pumpkins grown become Jack O'Lanterns  (nearly 998 million pounds of them)

The friendly gals do a great job of beautifully decorating the store and their products.  You would think you were in a big city shop instead of a little store out in the country. 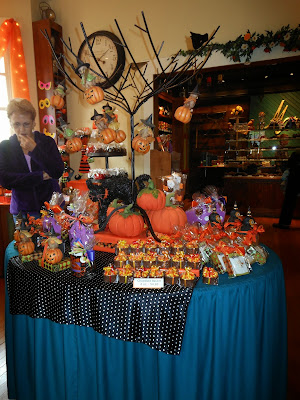 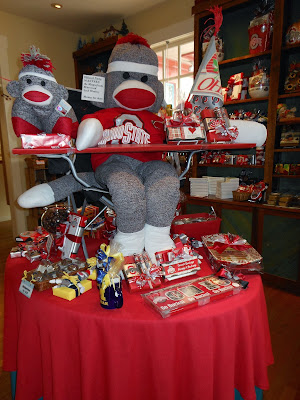 The hens were lazy this year and didn't decorate their house or ours.  But we do have some photos of the celebration!

Looks like a great candy store to visit Gale and it's nice to see Barb out and about. The chicken bucket is too funny as is the chicken coup done out for the day.
Cher Sunray Gardens
Goldenray Yorkies

Hi, this is Whitney! Barb showed me your blog post about our trip, thank you again for inviting us up and for getting lunch! It was a nice change of pace for the day :)