Remember the old saying "If it's too good to be true, it probably isn't?"  Well, I'd say that is pretty accurate.  Enter Hermes silk scarf.  For years I have admired them, visited collector's sites and glanced through them on Ebay occasionally.  It is on my bucket list to own at least one as I think they are works of art.  I have been known to splurge once in awhile on higher end items because they are either lovely, comfortable, attached to a special occasion, for someone else, useful, versatile and perhaps at least hold their value.  If I see a deal on something, the temptation gets overwhelming.  Or at least if I see what I think is a deal.... "see" I think is the operative word here.  Never again will I purchase something online from my tablet, even if I am wearing my glasses!  I also need to change from my "rose-colored lenses" to clear!  These scarves new go for $400ish, on Ebay of course there are varying prices.  My Seller was new and I thought maybe that contributed to the low bidding.  I was thrilled to get it for $93 over 17 other bids.  The thrill was over pretty quickly the second I opened the package.

Hermes (pronounced air-mess, not her-mees) was founded in 1837 as a high end bridle and saddlery.  Over the years they added apparel as well as famous leather goods such as "Birkin" and "Kelly" handbags which are highly sought after and retail for 5 digits.  Since most folks can't afford the bags, they collect the scarves.  Some famous folks seen in the scarves (but could also well afford the bags!) include Queen Elizabeth II, Jackie O, Grace Kelly, Sharon Stone, Madonna, Martha Stewart and many others.  There is now a book called "The Hermes Scarf: History and Mystique" for more information as well as Hermes.com and luxury-scarves.com has a nicely organized library of them too.  Here is what I copied from Wikipedia that appears to be accurate: 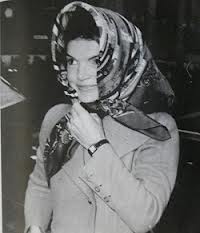 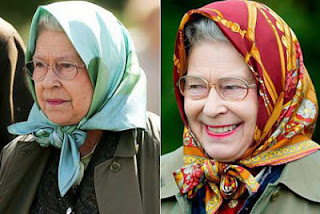 The scarf or carré was introduced in 1937.[4] One of the first, which was a print of white-wigged females playing a popular period game, was a custom-made accessory named Jeu des Omnibus et Dames Blanches.[4] Hermès oversaw the production of its scarves throughout the entire process, purchasing raw Chinese silk, spinning it into yarn, and weaving it into fabric twice as strong and heavy as most scarves available at the time.[4]

Contemporary Hermès scarves measure 90 cm × 90 cm, weigh 65 grams and are woven from the silk of 250 mulberry moth cocoons. [9] All of the hems are hand-stitched. Scarf motifs are wide-ranging, Two silk-scarf collections per year are released, along with some reprints of older designs and limited editions. And two collections per year are introduced in a Cashmere/silk blend. Since 1937, Hermès has produced over 25,000 unique designs; the horse motif is particularly famous and popular.[2] The seen-everywhere "Brides De Gala" version, introduced in 1957, has been produced more than 70,000 times. An Hermès scarf is sold somewhere in the world every 25 seconds; by the late 1970s more than 1.1 million scarves had been sold worldwide.[5]

All's well that end's well though as the Seller gave me a full refund including my original shipping.  She had no idea it was a copy.  So, a lesson learned the easy way for once, though I am still disappointed.  I think I will try again, unless I can make my way to an actual Hermes shop soon.  They are truly works of art--some folks make pillows out of them (Ugh!  That is scarf abuse!) or have them framed (but keep out of the sun.)  I would wear mine, maybe even to work so I can rock it with my polyester red vest!  Just kidding!

Here are some more examples, they can be found on about any subject matter with horses being the primary one: 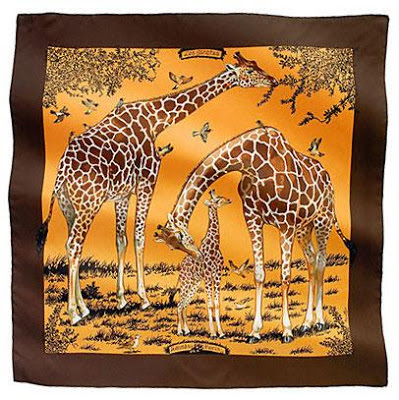 What a shame but just so you know. Do not buy that kind of stuff on ebay. They are almost always knockoffs Gale.
Cher Sunray Gardens
Goldenray Yorkies