We Painted The Town This Week! Literally!

I do apologize for the delay between posts, it's been one thing after another.  But there has been some fun along the way!  My friends/co-workers at Lowe's joined in Union County's "Community Care Day" and painted the town with paint generously donated by Valspar!

We had a watchful eye on the weather, but fortunately we on the morning crew beat the heat and had it made paintin' in the shade for the most part.  Other folks not so lucky.  Lowe's had several crews in different towns to spread the love (and paint) as much as we could. The United Way had a nicely organized breakfast for hundreds of volunteers.  The only disappointment was our name wasn't on the T-shirts or signs, but I assure you we will fix that next time!  To show you how we home improvement folks get along, Home Depot people held our place in line while we washed the first layer of grunge off for lunch!

My crew of Ashley, Mary, Susan and I painted a tiny dairy bar in Milford Center that will open in a few weeks, decked out in it's original colors when it was a Sinclair gas station.  (If you don't remember Sinclair gas stations, don't worry.  You have to be a dinosaur like me to remember the logo!) 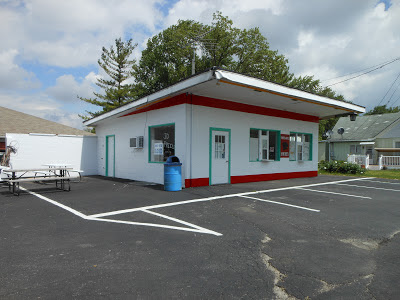 Previously "Woody's Dairy Bar," this will hopefully be redecorated in three weeks and open for the dozens of baseball leagues who stop in for after game treats.

We were very professional and no incidents to report except some paint in Susan's hair and me leaning up against the building.  The white part was repainted white and they had already rolled through...  I did take some crap for not being speedy, but I was on trim duty and am a bit OCD about messes!  We got the job done and did a whole building while some others were still finishing store fronts...  ahh hemmm! 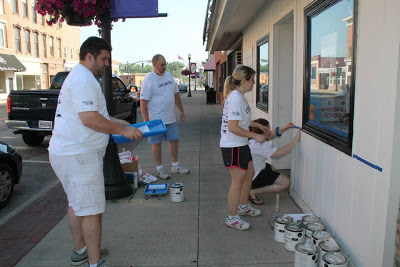 The other half of the team painted in downtown Marysville.

Lunch was donated by Buffalo Wild Wings and was also very organized and nice.  I met some other folks I hadn't seen in awhile from past school and library positions as well as got to know my co-workers better!

Then it was back to work for the rest of the day so other crews from the store could go.  Many thanks to our store manager and assistant managers for allowing us to "volunteer."  They try to support the community as best we can.

Until next time,  do something nice for your neighbor and have a safe Memorial Day weekend!

Impressive Gale. What a great project for the different businesses. Makes it way more fun to be involved with something like this.
Cher Sunray Gardens
Goldenray Yorkies