"The Tuck" Meets His Everlasting... His Way

Author's Note:
Please understand that though we are dog lovers, "Tucker" would want me to tell the truth about him.  He was a royal-pain-in-the-*** his entire life and he didn't care.  He was always looking for adventure.  It was all about him and we were his servants. ---GW-T 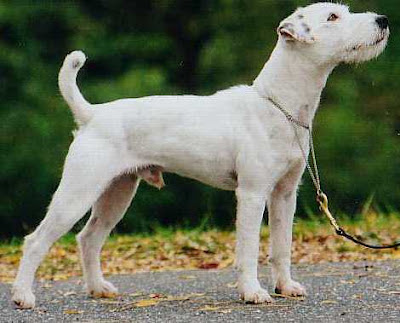 I really don't want everyone to think I am a "kennel-blind" snob.  I have had average dogs, dumb dogs, smart dogs, mixed breeds and pure-breds.  Between owning, showing, handling, training, boarding and grooming I have come in contact with hundreds of dogs;  many nice ones, one aforementioned (in a previous post) crazy one (well, there have been a few nut cases), but only a few great ones.  Please note that the "great" ones aren't necessarily the best pets...

Multi-JRTCA Working Terrier Champion and Bronze Medallion hunter Corn Row Tucker was the son of another great Jack Russell terrier named Corn Row Tyler owned/bred by Pam Simmons in KY.  Tyler won pretty much everything (including the national) in the JRTCA trials, then Pam moved over to the AKC and Tyler won Best of Breed at their first national specialty and the breed's debut at Westminster Kennel Club.  Aside from correct conformation, Tyler and Tucker also were known nationally as "smart."  We actually got calls from all around No. America asking if it was true.  (We didn't realize until later that this isn't necessarily a breed trait.) 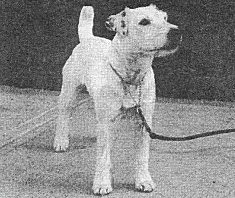 "Tucker" displaying his lovely front and tight feet, as well as his masculine head.


Yes, often unfortunately, Tucker was smart.  He was also a very proud dog.  He was arrogant to the end.  He took advantage of every opportunity to escape or get into something.  Our whole family spent 24/7 for 14 years keeping him alive.  If you didn't out-think him, the results were immediate.  He never quit his desire to take off, though crippled from a series of strokes, deaf and blind, he died doing just that.  This is as it should have been because were debating how much longer we should keep him going.  There were some days when I was sure we would have to make the decision, then he would do better.  Mark was out of town working a lot and he needed to be here when that decision was made, so I just did would I could.  We are very grateful our neighbors found him, so he could be buried at home.

But he was no picnic to live with most of his life:

In order to maintain him, his pen door had to have a snap.  We had four-board fence with diamond mesh lining and electric horse fence around the top.  Gates needed double and triple checked.  We had to lock all the doors in the house if he was loose "visiting" and watching TV.  If he found a lapse in our security, off he went and you could follow screaming at him to come back and maybe he would acknowledge you by throwing his head over his shoulder to smirk as he kept on running.  One time (and only once) I allowed him to hang out in the cool garage with a window slightly open.  Of course, he figured out a path to climb, shoved the window up more, jumped into the bushes and took off.

Mark loved to hunt and became a working terrier field judge.  But once Tucker got his Bronze, Mark was not too thrilled about taking him out.  The dog was an amazing hunter, but turning him loose meant you'd better keep up as Tuck would "wind" quarry and was off to the races, with briars, etc. not slowing him down.  It was pointless to call him as he never did come when called unless in a fence and wanting dinner.

Then one day we noticed him not barking and he tripped walking into our garage.  So, we raced him to the vet.  A 1 1/2 year old dog in prime condition was getting weaker by the hour.  Nobody knew what was wrong with him, especially the local vets who decided it was Lyme disease.  The meds weren't working though.  So, Mark started calling all around the country as it looked like we were going to lose him.  From top-notch university vets he got little help, but then someone mentioned a case about a coon dog and Mark started calling every good 'ol boy he could find.

The "good" news was Mark figured out what was wrong.  It was called "Coonhound Paralysis."  It is caused by swapping spit with an infected raccoon and getting some kind of microscopic worm.  It takes two weeks for the animal to look/act ill.  Exactly two weeks earlier, Tucker got into it with some coons.  He won the battle, but apparently not the war.  Nobody around here had ever heard of it and Tucker wasn't getting the right help.  Mark took him to Ohio State's Vet Clinic at midnight, where they had a respirator and 24 hour supervision available.  Apparently, the dog can get so weak they can't breathe.   The only "antidote" is to worm them hard after raccoon exposure, but it was a moot point by the time we found out.  This mega-scary (and mega-buck) adventure was just beginning.

Tucker went from bad to worse and was completely paralyzed, but he wound up not needing the respirator.  Apparently, it always gets bad before it gets better (and often they died) and we were told by the coon hunters we would have to wait it out as there wasn't a cure other then physical therapy and the physical/mental strength of the dog.  The neurologist who decided it was more important to go out to dinner and a movie, finally made it in to the clinic the next day.  He didn't believe Mark and without our knowledge, he performed exploratory surgery.  Besides a huge bill, the only other thing we got out of it was "yep, he's paralyzed."  Really?  He needed to operate to tell us that?

Mark was fit to be tied and said he was on his way to get him.  They said no.  Since Tuck had stabilized without the respirator there wasn't really any reason for him to stay.  From there on out it would be hand feeding and carrying him out to potty (Tucker was a clean dog and peeing the bed would mortify him.  He only pooped if Mark could find a bush while we were traveling. )  The vet folks argued, but Mark brought him home. 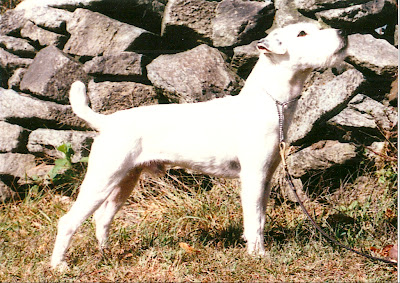 As handsome as he was, we only have a few good photos of him.  This was taken by a friend.

The "experts" said he would likely at least limp for the rest of his life.  But Mark was determined not to let that happen, especially on such a young, strong dog.  So, we took turns every two hours flipping him on the egg crate mattress, spoon feeding him and putting him on his back to work his joints.  In a few days he was standing on his own, but didn't walk for awhile.  It took a month before he was acting half-way normal.  He never did limp.

A few months later, Tucker started winning conformation trials, siring litters and acting 90% of his old self.  He never really got back his speed, though he could still out-run you and most dogs.  He couldn't stand to be cold and now and then he would get mopey and we would worry that it would come back.  He lived nearly 14 years, but I still think a lot of his health problems at the end were associated with that paralysis.


But we had many good years.  Folks used to call and thank us for not showing up at trials with him.  (Mark had to work for a living!)  Though Tucker hated to show--you could tell he thought it was dumb--some days he decided to humor us and pulled it together.   (He did like the "star" treatment!)  If it didn't involve hunting or girls, he really didn't care.  He had quite a following though.  The British judges loved his big head and narrow chest.  He never did "blow up" in the chest and was narrow and flexible all of his life.  He could fold nose to tail which is good when you are working underground and need to get out quickly.

Tucker was very controlling and relentless.  He hated all other male dogs.  Like most jack russells, he was racist.  They don't like dogs "of color."  If you weren't like them, you were their enemy.  Cats also generally have a limited life span around them.  He could catch wild birds.

He had several levels of barking:
"bark" delay "bark" delay "bark bark" meant dinner time.  He ate at 4:30 p.m. and would start in about 4:15.  He wouldn't stop if it took all night until he got fed.  He never said much at breakfast unless we were really late.  Whining, shrill barks were for hunting.  Howling barks were saved for the middle of the night when we had a bitch in season around.  It would drive you to drink until you put him in a crate next to our bed and shook it.  Then, he had the regular bark for when someone pulled up to the house.

He destroyed every toy he ever had.  We went through several Kung Fu bears that would say HI-YA! if it was squeezed.  He came unglued over that toy.  Mark bought him a so-called "indestructible" toy perfect for jack russells.  He returned the pieces to the vendor in less than 15 minutes.  They asked if he wanted a replacement and he said "What for?" 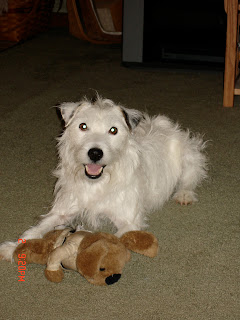 "Tucker" in winter coat with his umpteenth Kung Fu bear.

I'm sure there are many more stories I've forgotten to include.  He was a character to say the least.  Though he is gone, he will not be forgotten.  If any of you have stories about him to share, please post them in the comments.  We would love to hear them!

Really nice writeup Gale. I know Tucker was one of the "one in a millions" that most breeders will never get to own.
Cher Sunray Gardens
Goldenray Yorkies

LOL, If you read this as "mute" point, I meant "moot" point. I really should stop typing in my sleep!