(Check out the latest on what folks are sayin' 'bout "The Creek"...http://www.somethingwagging.com/2012/08/02/the-guilt-free-blog-award-edition/)

It could be (and has been) said that my husband and I are "hobby-aholics."  Although we've settled down a bit over the years, I think one's brain functions better when they learn new things.

So many of you won't find it hard to believe that "Santa" gave me a shotgun in the mid-1990s.  We needed to find something to do together that didn't involve young kids... this would definitely fit the bill.  Ironically, we lived more than 45 minutes from Mad River Sportsman's Club when we were shooting. We moved to within 15 minutes-ish thirteen years ago and haven't been there since.

Like with most "extreme" (to me) hobbies, it started with Mark.  He had guns before and is very knowledgeable about collecting, repairing, etc.  I, of course, had never even touched one (just like the motorcyle post. "Harley & Me"--see index.)  I still have some fear of handling my Browning Semi-Automatic, but that's probably a good thing.

Mark hired a coach and suggested I take a few lessons.  Nobody could explain it, but I hit most everything.  I still have some of the shells.  One of my best physical attributes used to be my vision.   That must have been why I was "Gale-Annie" Oakley LOL!  (BTW, my middle name is Ann.) 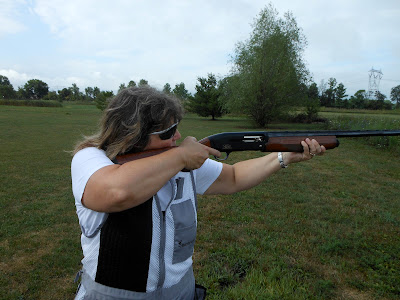 Another step to improve my accuracy was to have my gun "fitted" by a master gunsmith near Bowling Green, OH.  You take him the gun, he runs some tests on you and decides what will make you a better shot.  Then he makes some adjustments.  I will NEVER forget our conversation as I am sailing through the tests busting up target after target:  Me (giddily laughing):  "Tom, I have no idea what I'm doing!"  Tom (with major look of disbelief):  "You know what, I believe you!  There is no logical reason for it as you are all over when you aim, then you magically wind up at the right place! "

A bit deflating, but true.  Oh well, I can live with "dumb luck" as it appears to impress those around me.  I did have a hard time answering questions involving my "technique."  I'm afraid I wasn't much help to them.  I don't know isn't a definitive answer!  I do believe in shooting ahead of a target, but that's the only sound advice I have.

Of course shooting a 12 gauge shotgun isn't nearly as hard as shooting with a rifle because you can still get a piece of something in the shot pattern.  A bullet either hits or misses.  So, I am not an expert by any stretch of even my vivid imagination.  BUT...

Mark thought it would be fun to test our skills during a real tournament with real rules as well as folks that really shoot.  It wasn't just a little tournament either.  Mark is methodical and very good, so was in a much bigger, more advanced class.  I went into the women's non-pro class with maybe five times ever shooting in my life.  Lo and behold, this shotgun packin' mama actually won a trophy!  I scanned it for proof...LOL!

It proudly hangs alone on the wall among Mark's many awards: 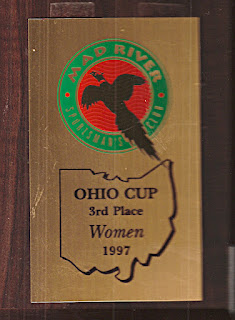 If it wasn't so expensive, Mark and I would probably still be doing this every now and then.  But, it was fun while it lasted.  I highly suggest at least trying it once.  Your local club will rent you a gun and provide everything you need.  For more info on a place in your area try "Sporting Clay" magazine either at the store or online.

Oh How funny! You are a Hoot!