OH-IO!!!! A Buck-Eye's View of The Scarlet and Gray Craze

(This is the first of several posts regarding the "scarlet & gray."  I hope you will check them out!)

We are soon entering the season where everywhere in the world (that has deciduous trees)folks will enjoy the flow of color from green to russet, orange and yellow.  Everywhere except Central Ohio that is, where the landscape turns scarlet and gray. 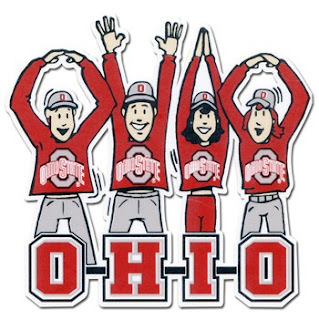 Yes, I am an alumnus of "The" Ohio State University (why do they insist on using the "The?") but there are thousands upon thousands of people who aren't that are way more hardcore Buckeye football fans than I am.  I do watch it, but don't always make it through the games awake:)

I'm not sure what the "Urban Nation" will bring.  The football program has been through the wringer.  It's disgraceful that it took the horrific events at Penn St. to draw attention away from our long-standing penchant for giving "superstar" status to folks who turn out to be common thieves, thugs, malcontents and ne'er-do-wells.  Let's face it, it's been going on since Art Schleister, (the star at the time I went there) who can't make an honest buck to save his life, then Maurice Clarett going to jail a decade-ish ago.

It's just this last fall from grace group took out a coach and a program with them (and years of wins and millions in income.  Thanks guys!  At least Woody did it to himself!)  I have to say that although Coach Tressel isn't the saint everyone thought he was, I think he was a good person who had a whole lot of pressure from the athletic dept, the school, the community and heck, the world.  There is no doubt others knew and he was forced to take the fall.  He obviously is smart enough to know he could contact the school's legal advisors without giving up confidentiality. 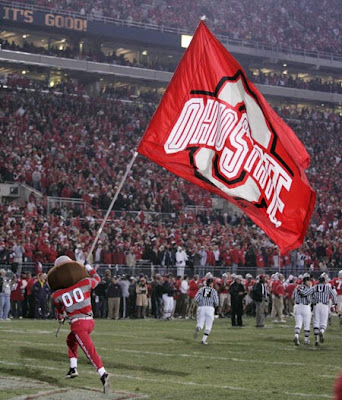 My niece Abby hanging out with Brutus Buckeye!  (I must admit I am a bit jealous!) 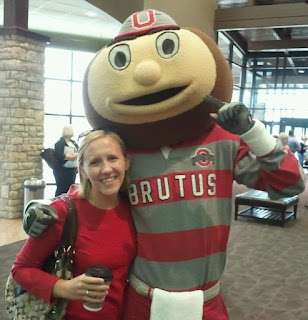 There are pros and cons to "Buckeye Fever."

2)The central Ohio grocery stores sell tons of food for tail-gating and snacks.  There are folks with grills bolted on to their truck bumpers driving around!  You can smell cookouts everywhere.

3)The local economy also gets a boost from sales of the perfunctory jerseys, hats, and foam fingers.

4)In a tough Ohio economy, it's cheap entertainment (except for the jillion dollar used-to-be hard to get tickets), something to take folk's minds off their troubles and be part of the larger picture.  Since attendance was so high, the games were almost never blacked out on TV.

5)You get to hear that awesome TDBITL (the best damn band in the land) OSU Marching Band!  They work as hard as the team, but without the perks (and the NCAA sanctions!) 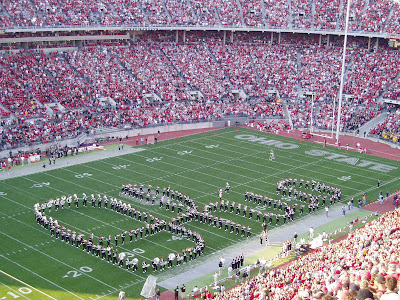 and there are many more... but the CONS:

1) The rest of the world has to ration red dye and clothing because we use it all.

2) "Normal" people turn into lunatics wearing face paint, no shirts, wigs or whatever in public and/or scream wildly at the TV.  They sometimes are superstitious about ridiculous things.  (I was once one of them, thinking I couldn't leave the kitchen because every time I did, something awful would happen.) 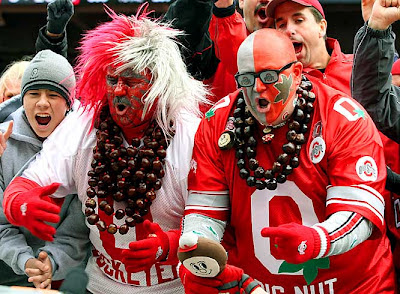 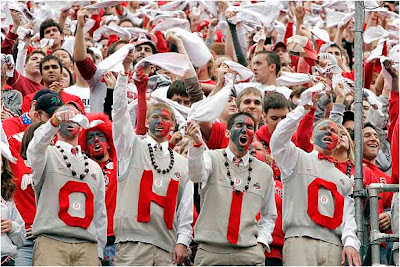 3) If you aren't part of this, you are stuck with it on every media outlet 24/7 for 3 months.  There are games, pre-game shows, post-game shows, re-runs of the games on Sunday, "Buckeye Fever" shows during the week, etc.

4) I feel sorry for folks on other local college teams.  They are pretty much swept under the rug (most with good reason though.)  I can't prove it, but I think OSU football has more fans than either, or maybe both of our NFL teams.

5) The "stress" probably sends folks to the hospital since we are famous for 4th Qtr. disasters (and infrequent last minute miracles.)

No doubt there are several more cons also...

Well, that's enough for today.  I have to be at work early.  If you have additional comments, please post them through the comment section. I'd love to hear from you! 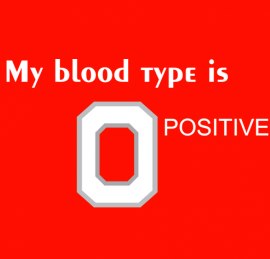 P.S.:  Saturday is a pre-season game day against Miami! 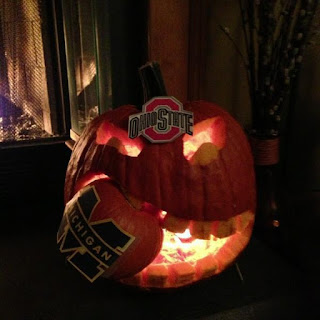 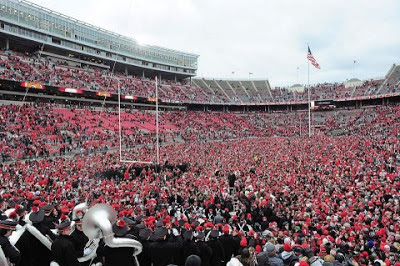 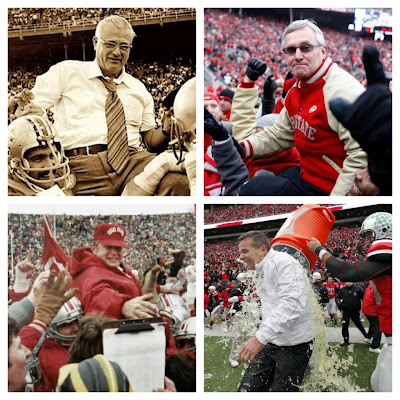 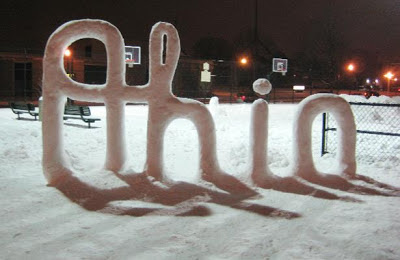 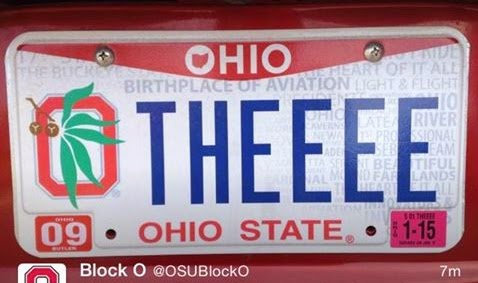 Good ones Gale. Oh so true. Hey I use to even have to listen to their song every Friday over the loudspeaker at work. The district manager just had to play it. LOL It was just all about the team and who could blame him.
Cher Sunray Gardens
Goldenray Yorkies

When we moved here in the early fifties from Lafayette, IN I was a Purdue fan since I attended Purdue and lived 1/2 mile from the campus. It didn't take too many years and I was an avid Buckeye. I am so looking forward to the first game! Barb A.