Out Of The Mouths Of Babes...

I have been soooo busy working that I haven't had time to write a new post, so here is another oldie, but I hope goodie article written several years ago.  I thought it would be appropriate to share this week in honor of the upcoming Mother's Day...Enjoy!  Don't forget to enter "Dash for the Stash!" drawing May 1st, 2015.! 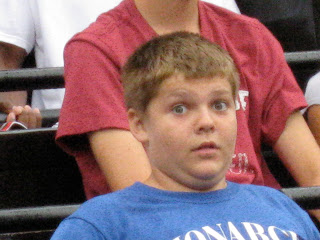 My son Taylor taken while riding the Viking ride at Busch Gardens about 5 years ago.

Capturing Your Children’s Words Will Give You A Lifetime of Laughs!
Kids say the “darned-est” things!  I should have recorded some of the funny things my children said in their “baby” years.  Like most parents, I was just too busy and really thought I would remember the “big ones.”  I don’t.  I highly recommend taking the time.  It’s never too late.  I started jotting down "Taylor-isms" when my son was six and have lots of fun material to use in scrapbooks, conversation and my future grandchildren’s enjoyment.  (I promised myself I wouldn’t embarrass him in front of his friends with it.  Hope I can keep that promise!)

Taylor is an out-of-the-box thinker.   He’s very innovative and smart, preferring to draw schematics and build motorcycles, rockets or cardboard houses than doing schoolwork (or cleaning his room.)   His pre-school teacher described him as a child with a “unique perspective.”  His Kindergarten teacher called him “the coolest kid I’ve ever met.”  Cool, maybe, but hard to keep in the real world.
Taylor’s language skills didn’t develop quickly.  He let everyone else finish his sentences until recently.

So, he often made up words or descriptions that only he can conjure.  Here are some of my favorites:

Until next time,
Gale
PS:  Here are another couple witty Taylor comments he has made recently.  At the Rock and Roll Hall of Fame a sidewalk vendor was selling "ice cold water."  Taylor said there was no such thing.  If it was that cold, it would be ice!
Audra left out some roast pork overnight and although I knew I would have to throw this rather large piece of meat, I said "Boy, I wish there was some household test available this to see if it was really bad.  Taylor said, "There is.  It's called a dog."  (Now we would NEVER hurt our dogs, but it was funny!)

Email ThisBlogThis!Share to TwitterShare to FacebookShare to Pinterest
Labels: children's humor, children's views on life, out of the mouths of babes

Enjoy all those happy memories and hope you have a wonderful Mother's Day.
Cher Sunray Gardens
Goldenray Yorkies