Be sure to read Part's One and Two (where the Port-o-Let's strike back!) as this is Part Three of the series:

I wanted to tell you a little more about the tests and the facility.  The first day was weird showing up to park and then being driven in an old school bus to an undisclosed location in the dark.  Once we were briefed we took buses to the lot where the cars were parked, did a brief car inspection, loaded the "secret" equipment on the roof, hooked it up and waited....and waited...and waited.

Sometimes to fill the silence they would play old tunes on the radio.  Mostly songs having to do with driving.  The only one I hadn't heard was one about "30,000 Pounds of Bananas" by Harry Chapin.  It's about a pretty gruesome tractor-trailer wreck and not something one might listen to at 7:15 a.m.

If you want to hear it:
http://youtube.com/watch?v=NZZqnVYB4UA

They would sometimes accidentally turn the sound on wrong for the radio and we could hear the engineers chatting.  They were mostly from India (Indianeers???) and I kept waiting for them to say "Johnny Five is alive!"

As I said earlier, we had lots of downtime sitting in idling cars that represented "traffic congestion."  Once we even had buzzards circling above.  The joke was if somebody fell asleep, the person next door should go "re-boot the driver."

The last couple days we were on the "Skid Pad" but kept calling it "skid row."  It was four miles long and had two "hairpin turns" which would be more exciting if we weren't driving so slow (my foot wasn't even on the gas a lot of the time.)  We did get to hit 70 sometimes to catch up... Woooo Hooo!  (Any faster and the equipment would fly off.)  The last day we were told we drove a combined 24,000 miles for that day only and a trip around the equator is 25,000 miles!

When the Port-O-lets weren't skating around, you could see some less funny, but interesting things.  While waiting I saw lots of other tests going on.  The cars that weren't on the market yet wore tight black jackets except on the front, rear and driver's windows.  You could still tell what they were by the shape (sorta.) Many of the fences were also tarped in black canvas with holes every few feet.  Some fences were solid.   The facility has a no fly zone, but they don't trust long range cameras, etc.   Cars that were testing internal stuff were body wrapped in the most obnoxious patterns imaginable.  I guessed it was to keep you from focusing very long and I was actually right!  Black, green and white puzzle pieces, camo, checkerboards...stuff that would make you dizzy. 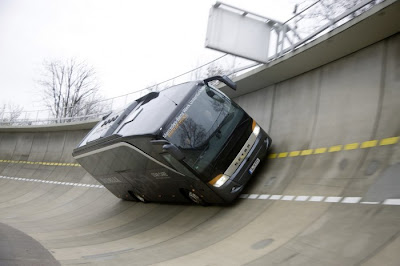 An example of a bus on a test track, but this was not from my job or the same facility.

I saw a brand new tour bus out on the speed track.  If you hit 50 mph on the banked curves you allegedly don't even have to steer.  No thanks.  That bus went flying around and was quite tilted on those banks.  There were cars climbing simulated hills over and over.  (...and I thought my job was mind-numbing!)  There was a cement circle filled with water that I named the "car pool," but it was really the brake soaker.  They moved the Port-O-Lets to the Skid Pad and I couldn't help noticing one was up against a pole with a windsock.  Maybe that was their "early warning system" LOL!

Well, that's the end of this story.  I hope you enjoyed it!  My next post will be an update of some previous posts, so stay tuned (and tell your friends to join us!)

Have a great weekend!
Gale
Posted by The Darby Creek Diaries at 10:12:00 PM

Well I wouldn't have wanted to drive that bus, and your job would have bored us all to death, yet money is money.
Cher Sunray Gardens
Goldenray Yorkies

Woah! I’m really loving the template/theme of this site. It’s simple, yet effective. A lot of times it’s very hard to get that “perfect balance” between user friendliness and appearance. I must say you have done a amazing job with this. In addition, the blog loads super quick for me on Firefox. Exceptional Blog!

I won't be able to thank you fully for the articles on your web-site. I know you'd put a lot of time and energy into all of them and hope you know how much I appreciate it. I hope I could do the same for someone else sometime.
HTTP://www.CoolMobilePhone.net