I can't believe it's been a year since I wrote my first post!  This is #60!  I hope I've kept you entertained and maybe even learned a tiny bit????  Since I am not a comedienne (and have never even played one on TV--but we'll get to that in another post,) I hope you enjoy the topics I share that aren't necessarily funny.

As I glance over the past year's posts, there are just a few updates:

RIP "Rocks Anne" the Barred Rock hen.  We clipped her wings, covered 98% of the pen with netting, yet she constantly escaped.  One night nobody counted beaks and she wound up roosting on the coop's flower box.  Something got her.

As I type this, I see a young bunny in our orchard.  Run, bunny, run!  No worries.  Ivy is now blind, nearly deaf and very arthritic.  Tucker and Jordan have long passed away.

Mark's bees have been swarming practically daily.  He is up to 27 hives.  I won't be mowing the orchard... one got me in the eye a few weeks ago, so I am done.

Audra has finished her first year at Ohio Wesleyan and is working in the Lowe's Garden Center moving hundreds of plants around.

Taylor went to Disney World with the Marysville High School Marching Band and played in the "Spectra-Magic Night Parade."  He had a lot of fun, but now understands why I will never do another long bus ride.  He had no a/c down or back.  I can't believe they didn't get it fixed.  They were there 5 days.  The windows don't open either.  The band did a great job and I am proud of them!

I started at Lowe's Garden Center the first of April as a quasi "assistant" live plant specialist.  Very unofficial, but I answered all the questions I could.  I do know a peony from a pine tree at least!  Last week I moved into the Appliance Department as a Sales Specialist.  I get air conditioning and permanent benefits.  Yeah!  I don't have to water the dryers either.  (But there are rows of stainless steel appliances to wipe down...)  My favorite customer question so far:  (Me wearing bright red Lowe's vest)..."Excuse me, but do you work here?"

I haven't done much with my yard because I would get home pooped and stiff (and sick of plants in general.)  I'm just now beginning to renew my interest in caring for my plants.  Audra took some photos of what is blooming here now.  Mostly, bearded irises this week.  I don't recall all of the proper names, but they are still lovely! 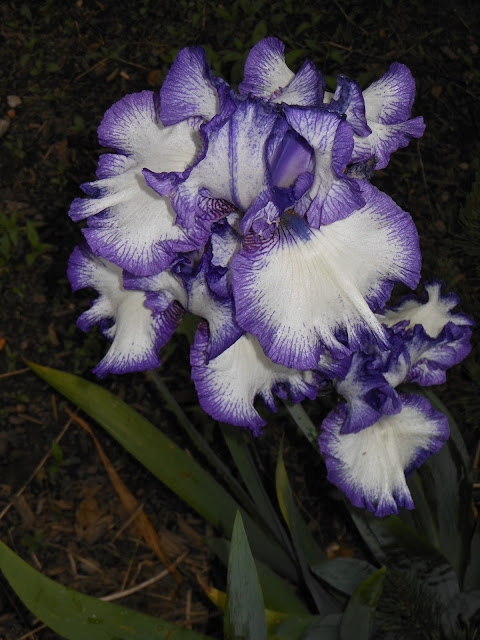 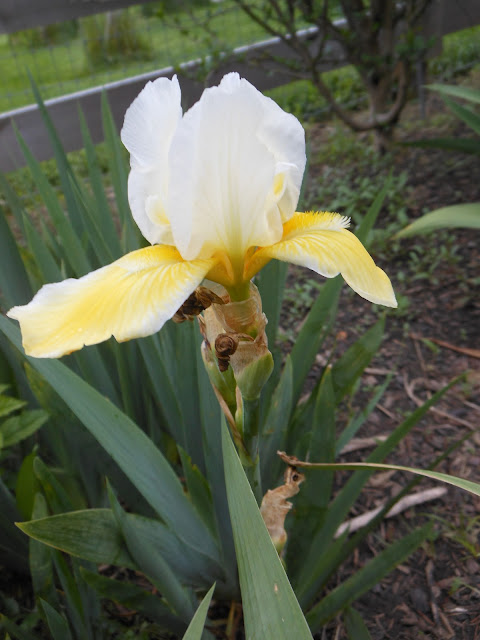 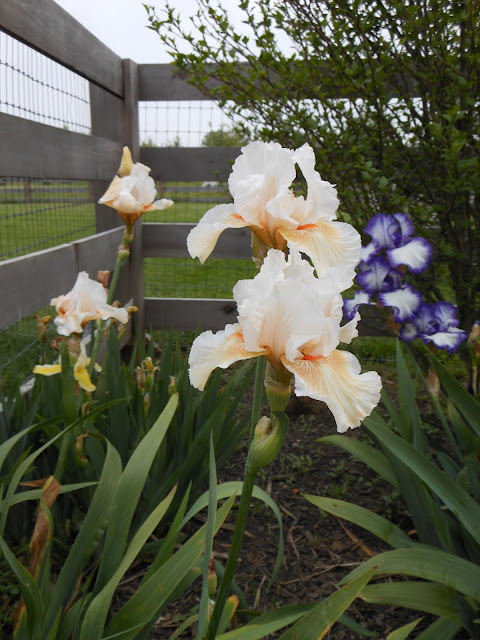 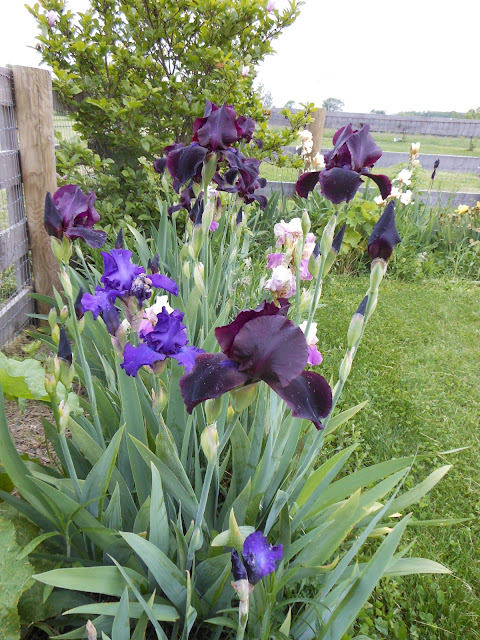 Bright Purple "Dusky Challenger"...Dark one is "Study in Black." 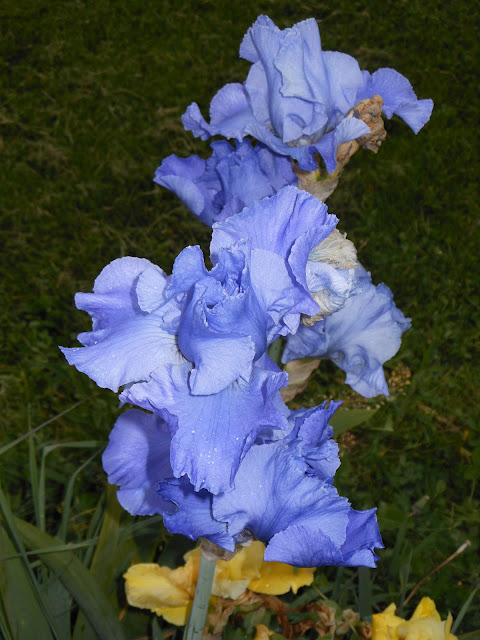 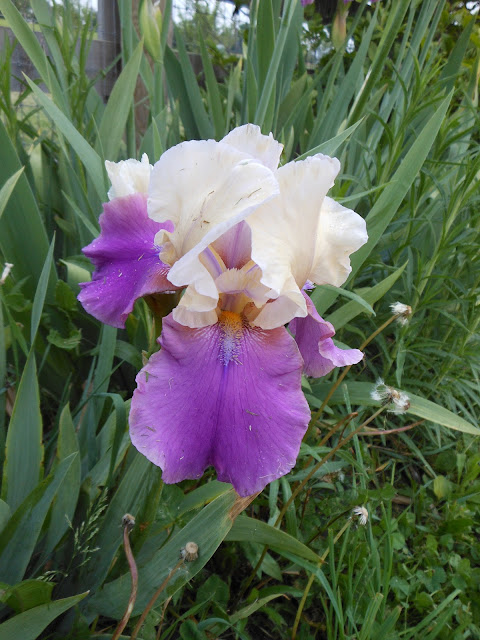 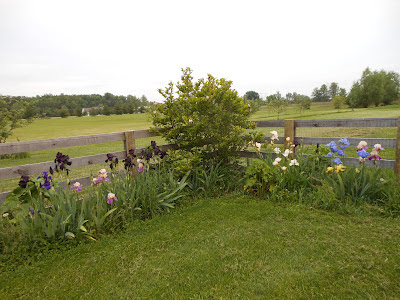 They hate mulch.  Leave most of the tuber exposed to air.  If buried, they will get mushy and possibly attacked by the iris borer.  Yuck!

They sort of thrive on neglect.  Part to full sun.  Fertilize if you feel you must.  Let die back in the summer on their own.  Best time to divide is August.  They may be mad the next year and not bloom after a move, but they will get over it.

Coming Soon:  Another Gale's Gallery!
I will be posting several "new" mediums over the next year, so stay tuned!

This is the scarf I knitted for Audra during the election day job.  It is made with discontinued ribbon I had in my box.  Of course, I didn't have enough and had to search the internet for another ball of it.  It likely was discontinued because it was miserable to work with.  You need large gauge needles and had to hang onto it because it was very slippery.  Never again, even though it is a cool effect. 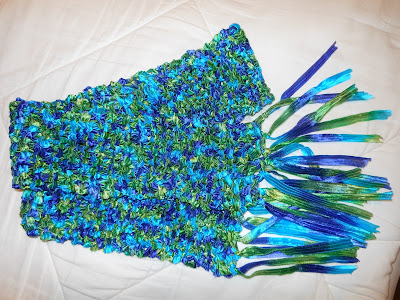 Well, that's it for this week.  Thank you all for a very fun year!!  Please come back and tell your friends!!!

Great photos Gale, you have some beauties. You know your bi color is different here then the one you brought me which I found the name of. The upper on mine is solid pretty much solid purple. Looked yours up and no question looking at photos yours is Creative Stitchery. The purple is Dusky Challenger and the black Study In Black.
Cher Sunray Gardens
Goldenray Yorkies