The Things We Do For Blogs lI: "Crash Test Dummy" Part 2--The Port-O-Lets Strike Back! 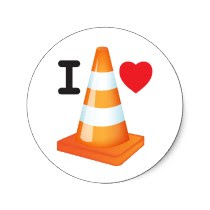 Every morning we would have a half hour briefing explaining the day's test pattern.  I think it was more so folks could get in one more cup of coffee before it got light enough to get to the car lot.  Most of the folks were very nice and came from all walks of life.  There were people who drove more than an hour to get there.  Work is pretty slow in central Ohio... Most folks were recently college grads, young moms and elderly folks.  I did a double take when the lady whose car was in front of me walked with a cane and dark glasses...she said her ex-boyfriend drove Nascar and she was gonna brag about this!  LOL.  She was every bit of 80, but really nice.  Turns out she wasn't feeble behind the wheel.  I nicknamed her "Lead-Foot Granny" because she was always running up on the car in front of her, which made me have to speed up to maintain the right spacing.  I would look up on a corner and she was gone!

The setting reminded me of the days when I would "hurry up and wait" on movie/TV sets with progress moving at glacial speed.  One gal described it as "jury duty in a car."  But it wasn't always like that...

"The Waltz of the Port-O-Lets"

There were days when many of the cars were "static."  This would usually mean driving to a spot and sitting in an idling car all day.  The cars had to run so the batteries would maintain power to the computers we each had on our roof.  I was car 89.  Parked in rows we looked like NY cabs and moving more like pizza delivery folks.  A day or two of static was fine by me as it was generally peaceful.  But one afternoon, not so much...

That week there were lots of tornadoes in the mid-section of the country.  One day we got a whole lot of wind and they weren't prepared.  Most of us were static in the cars with our windows down and of course our radios tuned to their frequency, which meant mostly silence.  The 20 or so port-o-lets were conveniently dotted throughout the test area with some a few dozen feet from cars.  We all laughed about them being owned by "BM Management," but it was soon to get funnier.  There were team leader folks out and about checking equipment, car spacing, giving directions etc.

A series of huge wind gusts hit that lot and those pots went a-scooting!  I saw two tip over and a couple more hit cars, tearing off mirrors and denting them all down the side (these were rentals mind you!)  But the very worst part I missed.  A couple of them skidded into cars on the driver's side and splashed the blue crap out of the port-o-let onto cars and some unfortunate drivers.  My skin still crawls thinking of that.  I don't think I can be grossed out any more!

The team leaders rushed to aid the folks, inspect the cars and hugged onto/sandbagged the port-o-lets.  When I saw them attach one bag per potty I figured it wasn't over.  It wasn't.  More skating potties... So, they decide to round them all up.  OK.  What the rocket scientists who own the pots didn't think about was there were no skid slots on the bottom, so they were picking them up with a forklift not attached to anything.  Gee, what do you think happened???  Now we have flying potties!

The sad thing by now is we (in the cars) were laughing so hard we nearly peed our pants, but we had no potty to use (safely!)  They finally took the school buses and drove them shotgun alongside the vans, trucks, whatever that were now shoving the potties to the corner of the lot as fast as they could.  Mind you, this whole adventure is being run by engineers...

I deeply regret signing the form that said I wouldn't take any pictures or videos...

The next morning's briefing, the head of the testing described what it was like to be in the watch tower watching the skating port-o-lets.  They have it on tape darn it!  They awarded the two drivers splashed on signed traffic cones with toilet paper coming out the top like a Hershey's kiss.  It would take more than that to appease me.  Hazmat would have had to come sterilize me!

Well, I will quit there for today.  But I do have one more installment, so stay tuned!!!

Quote of the Post:  "Don't judge each day by the harvest you reap, but by the seeds that you plant." --Robert Louis Stevenson
Posted by The Darby Creek Diaries at 10:51:00 AM

Gale, how do you find these jobs? Never a dull moment in your careers. Funny stuff!!

Too funny Gale. Have to try and do this next year. Let me know if they do it every year.
Cher Sunray Gardens
Goldenray Yorkies