The Things We Do For Blogs lI: "Crash Test Dummy" Part One 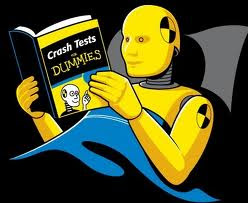 Day One:  Well, at the "Test Dummy" part is accurate:)  No crashes as of yet.  Kinda hard when you are parked most of the day and when you drive it's 20 MPH... in circles!

It all started with a sleepless night before.  I have trouble sleeping when I know I have to get up.  On top of that, I was not feeling well.  We were told we had to be there between 6:45 and 7 a.m. to catch buses.  I left at 6:15 a.m. and got there with what I thought was plenty of time at 6:35.  Folks here must really be grateful for jobs because they were already packing the buses!

The testing center is 4,500 acres.  The bus ride from the gate is 3 miles, all on the property.  There were 200 who showed up and all but a few made it through the whole seven 12 hour days straight.  Half were even coming for two days the next week.  (One guy was allegedly caught sleeping in his car where they found a beer can in the console and one in his lunch bucket.  Duh!  You really can't fix stupid!)

We had no idea what to expect, but we were told to bring reading material.   The rules were simple:  No eating/smoking in the car, no cellphones while driving, listen only to the radio signal that is giving us instructions, don't get out of the car unless they tell us and don't take photos of anything or give "Top Secret" information out.

Now, I can't give you any specifics about the testing (see rules) or your computer would have to self-destruct in two minutes...but there are plenty of things I can and will tell you!

The test was sponsored by several car companies and partially a government grant.  We weren't testing the cars, but safety equipment.  So, when they named the companies at the morning briefing, we were hoping for cool cars, but alas, I didn't get a dream car.  I got a nice, brand new Camry though.  The cars were all in that ilk except for the one Charger that a retired deputy got.  Didn't matter as speed wasn't on the docket anyway.

They were as organized as they could be for such a huge operation.  But, the first day we didn't actually drive until after lunch.  It took forever to get everyone in place and for the kinks to be worked out of the computer system.  So, I read and read some more in the car.  I had a Diet Coke with me in a bottle (that was allowed) but I was afraid to drink it for fear of having to potty during a test!  I rationed it like it was the last one I would ever drink.  Turns out, they were fairly good about well-spaced breaks and plenty of port-o-lets.  There was a funny adventure with those potties that will be it's own post!

I promise to tell you Part Two "The Port-O-Lets Strike Back"very soon (it's hilarious!,) but I need to get up early for work and still have a couple chores tonight.

Take care and come back!
Gale

You are right some people just can't seem to get away from stupid can they?
Cher Sunray Gardens
Goldenray Yorkies