If one didn't know that we are basically a normal family running a normal household, you would surely think we were dysfunctional.  I don't know if I've always lived with this much drama or if blogging just makes me focus on it.  Could it be that greater powers just want me to have something interesting to write about?

This adventure is once again about a disappearing dog.  This is I hope the end of a really bad streak.  We are competent folks who keep dogs fenced, penned or under lock and key.  But "s--t happens" and it seems to happen here.  The folks who follow or at least look this blog up often were told this would be a humor column.  I promise to get back to that ASAP.

Thursday, October 7th was a nice, uneventful sunny day here in The Buckeye State.  That evening I decided to put the chickens away before my yoga class because it's hard to find them in the dark.  I was in the usual hurry which causes most of life's disasters.  Apparently, I either didn't shut the gate all the way or more likely I didn't get the snap in good enough (the gates have started sagging.)  Right after class I put out Tucker and Karma (13 year old nut case Jack Russell) and left to pick up Taylor from the Homecoming Parade.

When we returned a half hour later it was pitch black.  I saw Karma standing at the front gate and decided to put them away as Tuck hates being outside since his series of strokes and illnesses.  I hollered for him (stupid because he's 90% deaf and nearly that blind.) and no Tuck.  So, I walk around the yard thinking he was "stuck" somewhere.  He couldn't back up and would walk into corners and stand.  When I saw the side gate cracked open, my stomach sank.  Not again!!!!

The one thing about Tucker was his predictability.  He escaped at every opportunity, but we were usually on his heels and he always went across the street to the neighbor's old barns.  (Takes a lot of the guesswork out and saves time, if not aggravation.)  So, I grabbed a lead and went over.  Here I am calling for a deaf/blind dog in the dark.  Mark, of course, was working on the East Coast, but planning on coming home the next day.  There are loads of old groundhog holes and he could hole up and I'd never find him.

He was limping that day, so he couldn't have gone far.  I walked around a bit without a working flashlight and decided he would probably sleep until daylight.  So, I drove the perfunctory "ditch tour" around the neighborhood and didn't see him anywhere.  I drove to the back of our property and shined the headlights by the pond and fields.  I guess there is a reason Mark and I only have 4 wheel drive vehicles.  While out driving, I reported to that fellow that walks daily there was another missing dog.  He replied, "I'm never gonna let you watch my dogs!"  Ha Ha--he acted like he was kidding, but I doubt it.  I don't run a boarding kennel anyway.

I got up the next morning at the crack of dawn and set out.  I actually put on appropriate clothes for the briers and poison ivy, but my tennis shoes were soaked within a few minutes.  Duh.  I carried around some bread and took Karma (on a lead) to maybe flush him out as he hated her.  I did what Mark said and followed the creek and went through the barns (at least the parts I could reach.)  A couple hours of this and I decided Mark could look when he got home a few hours later.  I did make another drive around the neighborhood and the back of our property, circling the pond again.

I was taking a cold shower :( to ward off any poison ivy) when the phone rang.  I heard Vivian (a friend who also happens to have my rooster James Brown) on the machine.  She said she thought she had my dog at the shelter.  I sort of dried off and called her back.  The most embarrassing words to have to say were "Which one?"  Deja Vu all over again....

She said she was sure it was Ivy.    Now, she had only seen Ivy once a couple months ago and I don't even think she knew she was missing.  Ivy is microchipped, but they skipped all that and looked us up in the phone book.  This has been the only reason to have a land line that I can think of.  I called Mark and took off.

I walk into the exam room and all I saw was her nose and I knew it was her.  Completely pissed off about being in a wall crate, weak, skinny and filthy.  Apparently, someone dropped her off at this guy's place a week before and he had kept her, tried to feed her and give her a bath.  My bet is that the first person also picked her up and was hoping to find reward signs.  (I decided not to do them because everyone within a couple miles knows little white escapee dogs were likely ours and I figured a coyote got her.)  When the reward wasn't forthcoming, then they dumped her as did guy number two who likely thought she would die on him as she was wobbly.

I plopped down a $100 bill and asked it that would cover some Frontline as she wasn't getting in my car without it!  They did and I don't mind a bit making donations to them, but normally I prefer to do it under different circumstances.

The kids and Mark were thrilled.  Once I got her settled, it was time to focus on Tucker.  Mark got home and looked next door and said he was sure he wasn't there.  He would know as he hunted that dog all of  Tucker's life.  I had to leave to take Truly, my Japanese Chin, to her co-owners for a show weekend, so I split.

As I made a right down my road, the oddest thing happened.  Now, it could be nothing, but still it is freaky.  A solid white bird started to fly alongside me as I drove down the road.  I wouldn't have noticed, but I've never seen an all white wild bird around here.  It flew for maybe 50 yards, then veered off over a field.  But at that moment, I just knew Tucker was dead.  At that exact time Mark saw a whitish thing floating in the pond, but way out in the middle.  There wasn't a rowboat and Mark stared for 15 minutes and decided it must just be debris.

When I got back Mark had left for the football game and my friend (and pond owner) called saying she had Tucker.  Bless their hearts, they (she and her husband) saw him floating beside their dock and fished him out, bagged him and put him in their barn so varments wouldn't get to him.  That is a real friend.

The next morning we gathered for a moment to remember him.  I will be writing his obit soon, but it's too long to do now.  Mark said he likely didn't suffer long because he was weak and mentally gone.  We were discussing putting him down just days before.  Maybe Tuck heard us.  He was the most independent dog you could imagine and dying on his own is quite fitting.  If you are prone to crying don't scroll to the photo below:

Mark told Ivy it was nice of her to attend...  Until next time, take care! Gale 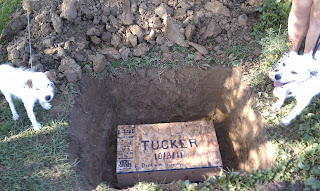