Back to the Future: Retirement Dilemma Revisited (Part 2)

Here is the rest of the story...

I got a comment from a follower who also plans to work forever.  I told her it would normally be comforting to be in the same boat, but in this case it's the Titanic...

My OPERS retirement statement just arrived.  Woooo Hoooo, after 10 years of substitute teaching I am only 13 days shy of 5 years of credit!  I also have a tiny bit of Social Security, which in my opinion is the world's most elaborate pyramid scheme. Unfortunately, people have been having fewer kids, so whose gonna be on the bottom row supporting us?  What an oxymoron!  It sure isn't secure and I heard scuttlebutt that Congress is thinking about extending the retirement age two more years.  If you read Part 1, you will recall the AARP retirement calculator suggested we wait and retire until age 87.  Now it could be 89.  If you are planning a retirement party for me, you have time to actually age the wine and cheese.  Hope all of you are around to party with me at my park bench.

Maybe I will hit the lottery, providing I ever can afford to buy a ticket.  Since I've never won any kind of drawing, I will certainly be due.  People think I'm cheap when I pass on buying raffle tickets, but for me it's  a waste...I'd rather make a donation and write if off.

If the lottery doesn't work out, I will need a Plan B.  I should have been a "cougar" and married an infant who would still be able to work.  Mark is only a year and a half younger than me.  I guess I had better cut back to a half-pack a day (of Oreos).  I'd quit altogether, but let's not get crazy here.  I still have 37 more years of work you know.  I could do like every TV retirement advisor says and give up Starbucks, but I don't like coffee.  I have decided to have a talk with our dogs.  The saying "work like a dog"is also an oxymoron as they do nothing but sleep and eat (poop and pee) and in our case, disappear!

Plan C I guess would be to sell everything of value we own.  I have a house chock full of worthless Longaberger Baskets.  I sold off some of the "valuable" Beanie Babies and gave the rest to our church for the Haitian kids.  I sure do know how to pick collectibles that wind up collecting dust instead of cash.  Ask me what I am going to invest in, then don't follow my lead.  I have a several Rubbermaid containers full of Hallmark Ornaments (even was a member of the Collector's Club) and you can't give them away on Ebay.

Then there were the designer and collectible Barbie dolls.  Poor Audra got yelled at if she even touched the boxes, much less played with them.  A lot of them are on Ebay for less than I paid for them in the 90s.  They also hang out in storage containers in the basement.  If I would've taken the money and even put it in a dumb savings account I would be ahead and the basement wouldn't be so cluttered!

The all-time worst "thing" to collect has to be pets.  They eat and poop cold, hard cash.  We gave up horses thinking we were so financially "savvy" and smart to rid ourselves of the boat anchor around our neck when the board, entries, vet's, trainer's and farrier's bills went away, but we soon filled the house with dogs and kids.
At least someone else was taking care of the horses...

In a few posts, I think I will explore work options for us geriatric folks (though Taylor just promised he will be so rich and famous as a mechanical engineer/ lead guitarist that we won't have to worry)...next one will be yet another bizarre tale that is both happy and sad.  I'm not quite up to writing it yet, but come back mid-week please!

"Borrowed" from FB describing my last week...NOT my chicken LOL): 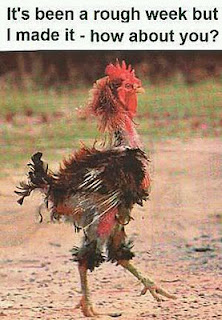 I know how you feel about collectibles. Crazy world and getting worse. Making some heavy decisions of my own here soon.
Cher Sunray Gardens
Goldenray Yorkies