Are There Skeletons In YOUR closet??? You'd Be Surprised!

Last year for Christmas I thought I'd do a family tree for my family and Mark's.  Like everything I do, it got way out of proportion.  If you are kicking around the idea of finding out "Who's Your (great, great, great, etc.) Daddy," here are some thoughts (if not actually advice LOL):

When someone says it's the journey and not the result, they are full of it.  I want results and it ain't as easy as those commercials for ancestry.com.  They would have you believe with the click of a mouse you will find out everything there is to know (and then some...  often way too much information) about your family history.

I got sucked in on the free two week trial thinking I could knock this out in no time.  Well, I spent around 40 hours online those two weeks and was nowhere near finished.  They know this, so you give your  credit card number and pay $14.95 a month.  If you want foreign country info it's even more.  You have to cancel or they will keep renewing.  I figured I'd surely make it in one month.  I worked like a fiend and finally had to quit at an arbitrary century so I would have time to try and fill in the blanks.  Barely made it and there are huge holes.   I also had the luxury of my Grandma Hinkston's completed tree, done by one of her nephews.  That was 1/4 of mine done right there!  Here is a photo of my stylin' Great Grandma Lula LaVina Wisner Shaw (Grandma Hinkston's mom.)  What fashion sense I inherited!   Downplayed, yet over the top! 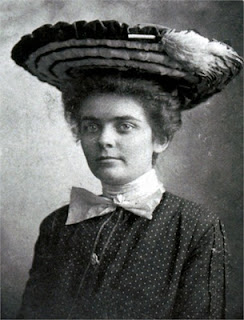 Some folks may find this fun, but I really didn't.  Probably had something to do with my self-imposed deadline.  But it was kind of interesting.  Things I learned:

1.  Everyone goes back to someone famous, someone infamous and someone ugly.  In my case,  if all is correct, I go back to King Charlemagne and a Concubine, many European monarchs (inbred beyond belief), a scribe to George Washington at Valley Forge (verified),  the Hershey family (justifying for good my addiction to chocolate), Pocahontas's half-sister and Chief Eagle Plume who wiped out a village of settlers because of John Smith.  One unfortunate nobleman, Lord Dacre, was executed because he was deer hunting on someone else's land.  During the "getaway" someone accidentally died, so the whole hunting party was hanged.  As for ugly, get a load of some of these folks!  It's a miracle I'm so good-looking LOL! 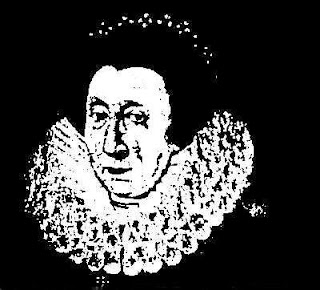 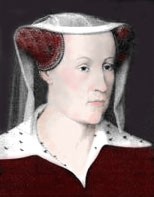 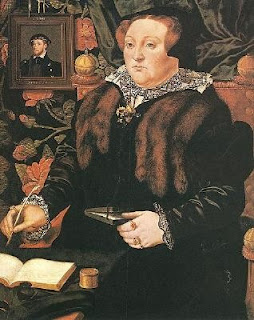 Baroness Mary Neville
2.  Be prepared to be confused.  I wound up using a color coded system and nearly ran out of colors!  Also, there are millions (OK, hundreds) of people with the same name.  You will go cross-eyed double checking those tiny public records.  In my tree alone, I have 4 great+ grandfathers named Valentine.  Who names a boy Valentine????  My maiden name is Williams.  If you are a Jones, Smith or Williams, good luck!


3.  If you give this hard earned library of information to your relatives, they will have no idea of how much work it was and no idea of what to do with it.  Just don't expect gushing thanks.  You will also spend a small fortune printing it, so have them go to ancestry.com for free and they can do it themselves.


4.  There will be many dead ends.  Let them die or you will go nuts.  Also, you will find impossibilities and other landmines.  It is pretty difficult to have children after you die or before you were born.  If they supposedly had children while under the age of 15, I threw it out.  Even if true, that's just gross.  You will think you are finished, then push one last "shaking leaf" hint and wind up on a day-long labyrinth of a mess.


5.  If you do your husband's family, you will have endless things to make fun of!  I call Mark "Loser" because every single civil war period relative of his was a Confederate (his great+ grandpa was Robert E. Lee's brother.  Their father sold the land all down the Potomac to the government, but kept Arlington Cemetery for the family.  When Robert lost the war, they put the cemetery in his front yard so he could look out every day at the damage he'd done.  The house on the hill behind Kennedy's grave is the Lee house.  He also had mostly lower-ranking "red-shirt" types in that army.  As you may have guessed, my family all fought for the North and were highly ranked!  He also had some hilarious names in his tree--my favorite is Aristides Cornelius Landstreet.  Geesh, why didn't we name our son Taylor after him?  (Actually, he did try to convince me to name him Early after a legendary Prince Early in their family.  I say legendary, because I never found a shred of evidence that there was one.  Also, when one dies they are known as late---so he would wind up "the late Early."  No way.)


Well, if I haven't scared you, try it and see what you find.  I'd love to hear!

Gale what you are going to hear from me is I would love someone to do mine for me. LOL Really you have it now and the kids may appreciate it someday.
Cher Sunray Gardens
Goldenray Yorkies

LOL, I love you, but not that much! I have edited the piece a bit, so you might want to reread at least the bottom of it---I make loads of fun of Mark's family. I always seem to forget something!

My kids might appreciate someday, but nobody else said much. I thought the rest of my family would respond better. I wanted each person to pull out someone interesting and write up a little story. Wouldn't take long, but they totally avoided doing it. They didn't want to read the material, just hear the highlights.

Wait....LULA LAVINA??? LULA LAVINA? If I found such a person in my lineage, I would stop there and change my name to Lula LaVina. How fabulous is THAT??? Just look at her, with her upside down sombrero with a feather and her crazy bow tie lookin thing! That had to be worth $14.95 alone!
I am almost an orphan and have very little information about my family, but I will from here on out, tell people my great grandmother's name was Lula LaVina.
And that she was a fashionista.

ROFLOL! I would be proud to call you cuz! I wish I had the guts to wear a raft on my head. Get this: W is pronounced like a V so her name had a roll to it. Mom said she was flamboyant. She died 12 years before I was born so I never met her. I do know they were homesteaders in the Ozarks with 9 kids. So she must have really saved the egg money to get that hat.

You ought to see what you can find during the trial two weeks at ancestry.com If nothing, you aren't out anything.

I've been working on my family tree for over a year. I just finished my Masters in Library Science so I'm kinda geeky like that. Being in Graduate school I had very little time to work on it and I suffer from ADD so it's difficult for me to focus on just one relative at a time. My mind goes every which way and I get side tracked much too easily for such a task. I'm glad you gave the advice about ancestry.com. However, I know I'm going to have to break down and splurge for it since all of my dad's side of the family came from Russia. I may never get that half finished unless I learn to speak Russian--that isn't going to happen. You have a lovely, giving spirit, I can tell. I'm very stingy with this thing as I don't want my sister to find out all the work I've done. She has a tendency to copy the things I do and then does it better than I. I know. I'm a terrible person, but I'll leave the username and password to it in my last will and testament.
Take care,

You know what? My gift of 3,600+ relatives was mostly met with "that's nice" and I bet most of them haven't even looked at it since. I really hoped someone would get into some of the people and research them, but no. I think they wanted me to do that too. Since the real reason to do it was for my kids (and the thought it was easy and free LOL) I am going to live with it.

I think it's nice you will at least give them the word in your will! Doesn't sound like they deserve it. Good luck with the Russian, that would drive me crazy--I didn't even pursue my Dutch relatives! Take care (and you are not a bad person....)
Gale