I'd have no luck at all!"  The disaster today also came out of the blue.  It was cold and windy and I was in a hurry.  That is the usual premise for nearly all my disasters...I was introducing the little girls (chickens) to the older ones.  I was tired of cleaning out the basement pen, especially when I am still taking care of that dog for those folks on vacation.

Well, I had them safe in the pen, with a vari-kennel with straw temporary house, encircled with an ex-pen  (dog exercise pen, basically portable fence panels--this one is 5 ft high.)  That way they could "talk" to each other through the wire and nobody gets hurt.  This would be fine if it weren't for the cold, wind and rain that suddenly appeared (Ohio weather, there's nothing like it!)  Well, I put the little ones in the vari-kennel with food and water and placed the whole thing in the hen house at night.  The hens had their beaks out of joint this morning though when I decided to let all run together to see what would happen.

I pushed back the ex-pen without thinking up against the back fence I had hooked it with.  This made a little wedge area and the little girls went back there to escape nasty Gloria and Bonnie Blue.  They were stacked up back there when I left but had access to food and water.  I put the crate against the gate as they were escaping through the door gap.

Now this pen has netting over the top and is made of sturdy dog run fence.  They have the best I can afford.  It never occurred to me that it wasn't enough...

I came home from errands to find a hawk staring at me and poor Buffy (one of the three young ones and a Buff Orphington) half-through the fence and decapitated.  It was like a bad dream.  My wonderful neighbor Gerald came over to clean up the carnage as I am just too old to grow up and do it myself.  All the while, five hawks were slowly circling my property.  They wanted to finish their chicken dinner.  Over MY dead body!

Gerald told me that the Game Warden had told him it is legal to shoot a hawk if it endangers livestock or poultry.  I've never shot at a living thing in my life, but I came in and got my Browning Gold Hunter shotgun and some shells.  I sat out on the picnic table by the barn looking like Elmer Fudd waiting for those suckers.  They flew over a few neighbor's away and when they finally circled back I couldn't take a safe shot.  Not really worth shooting a neighbor over, but close.  I noticed my north neighbor came home and quickly went into his house LOL.

BTW, most of you don't know that I am a pretty good shot.  Hubby and I shot sporting clays before the kids got so expensive we had to give it up.  I only had 3 lessons (only time I had ever touched a gun) or so and just for fun competed in the Ohio Cup and actually got third place!  Not because I have wonderful technique mind you, but I had great vision and the ability to correct aim quickly.

Well, tomorrow is another day.  I am taking off work to finish the job on the hawks and the rest of the adding of chicken wire to the lower half of the pen fence.  Taylor helped me a lot with that.  Mark is of course out of town when most of the awful things happen.  The girls are safely in the hen house tonight. Chickens don't do much in the dark.  Tomorrow a.m. I will see what happens.

I don't have a recent picture of Buffy, though she was only 4 or 5 weeks old.  I took more of the first group of hens, just like first children.  I was going to shoot (er, photograph) them this weekend.  So here is sort of an "old" one. 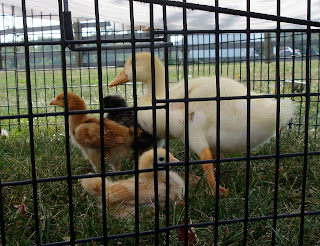 Also wanted to mention that Daisy has found a new home right around the corner.  Audra is never home to care for her and trust me, ducks are the messiest pets ever.  Now she is with her own kind in a place where she can roam (watch out for hawks!) and never be eaten.  Here is a photo taken as she left. 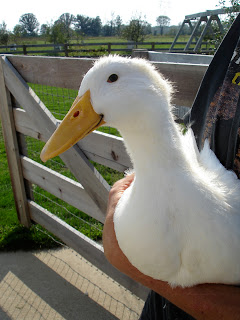 Take care, that's all for now.  Next time I want to get back to the lighter side.  Hang in there!

Oh gee Gale, your luck has really been the pits lately. That is the problem with smaller livestock. To be honest it's why my dogs are always in the house or only one goes out with me at a time because I have Hawks hovering here. Get your gun Annie!
Cher Sunray Gardens
Goldenray Yorkies

Damn hawks! After you explained what a good shot you are I was hoping you'd taken one (or more) down. RIP Buffy.
RYN: Funny you mentioned Scott's when you left a note. I finished filling out my profile for their updates just last evening. ;) Take care, Freda

Trust me, I just picked up high velocity shells. I may have lost a battle, but I intend to win the war! They've already been back today, but something always happens to scare them off. I will be waiting...

Poor Buffy. So sorry for your loss, Gale. I wish I could shoot the gun. I hate the sparrows and want to shoot them for killing the bluebirds. My hubby doesn't think it is wise to have a gun. I don't know if I could shoot anything anyways, but I would like to get some sparrows and hawks...

You could do it. Sometimes it just needs to be done. I have only shot at paper people and clay targets, but now the hawks know where a chicken dinner is and keep coming back. So far, they have stayed out of shooting range, but I will keep watching.

I miss my bluebirds. They left when neighbors built on the next door lot. Once there was a tree full of them in my front yard. I ran for the camera, but you can guess what happened. There weren't any leaves on the tree and it was stunning.

If you take a class and keep your gun unloaded with the shells separate, you would be fine. There may come a time when we can't buy them anymore...