John Glenn passed away last week, with his final memorial service today.  He was an amazing person, but more than that by all accounts a very down to Earth, gracious and humble man.  This fellow, who had flown fighter jets in two wars, was a test pilot, first man to orbit the Earth, national hero, then later a four-term US Senator from Ohio took the time to hand write a 6th grader, me, to help with a school project. 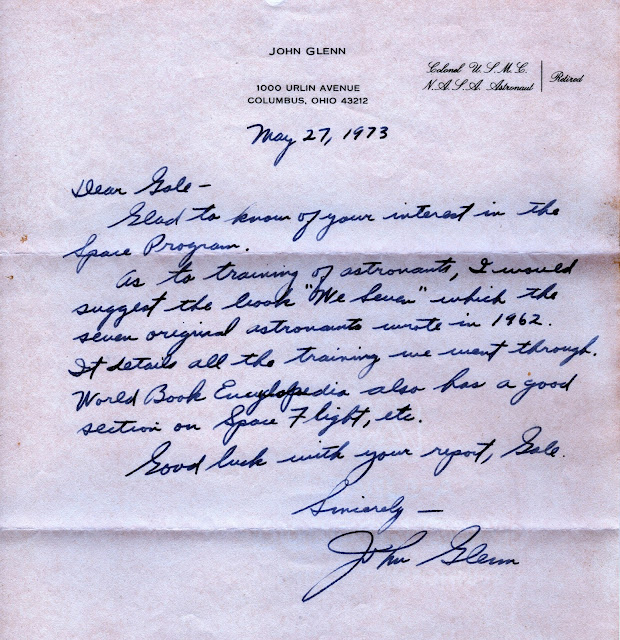 I read many books about him and intend to watch "The Right Stuff" soon.  There is a new movie "Hidden Figures" just released about the space program at NASA during the early space race.  John specifically said if Katherine Johnson, a negro woman, didn't personally review all the mathematical equations for his first Earth orbit, he wouldn't go.  This was not a popular move within NASA at the time, but he didn't care.  He wanted to make it back and have the best person on the job.

He was married 73 years to his beloved Annie and was extremely patient and protective of her because she stutters.  Believe me, it takes a lot of patience not to finish their sentences for them, so I have great respect for that.  He was an active presence at both Muskingum College in his hometown of New Concord, Ohio and at the John Glenn School of Public Affairs at The Ohio State University. Port Columbus Intl. Airport here in Columbus, Ohio was recently renamed John Glenn Intl. Airport in his honor just a few months ago.

He lived 95 years mostly in the public eye and managed to avoid scandal, so that speaks volumes for his integrity.  (Especially since he was a close friend of Bobby Kennedy.)  Even though he was a Democrat, the pretty much Republican state of Ohio voted him into the US Senate with overwhelming margins four times.