Audra, Taylor and I recently took a really quick trip to Universal Studios Orlando.  I would like to tell you a bit about it and some things we learned along the way.  There will be another "Wizard" Version that details the Harry Potter side of things for folks who want more in depth info on that aspect of the trip.

It started out with buying a trip package from Allegiant Airlines.  I hadn't heard much about them, but I knew they specialized in travel to FL and were kind of a bargain airline.  Well, I'm not sure I saved a ton of money as the fees kept mounting, but I probably did.  However, we had very nice, uneventful  flights both ways.  The planes are new, the staff polite, checking in was easy--I really wouldn't have had to buy the priority checkin, but for $8 a person, it was nice to put your stuff away and be seated before the hoard.   I really liked flying out of Rickenbacker Airport as my jeep was parked in the front row and it was a short walk to the terminal.

The snacks and drinks weren't outlandishly priced, but you could bring your own on board as long as the drink was purchased in the "sanitary zone"--meaning after security check.  When landing in Orlando-Sandord, the crew was a little giddy as it was their last stop.  All of the sudden what looked like white smoke started rolling out from behind the overhead bins.  Really, it was refrigerant, but still a surprise as I hadn't flown in a long time.  The head attendant put music from "Thriller" on the P.A. system and we laughed.  Taylor said "I thought this was a non-smoking flight!"

We just had carryons, so we took another brief walk across a covered street and picked up the Alamo rental car.  It took maybe 3 minutes to check in and another couple to go find the car.  They didn't have the car I ordered, so we got a free upgrade.  It was a Ford Focus and very nice.  We hit Orlando rush hour traffic, but still made it to the Doubletree by Hilton in 45 minutes or so.

Check in there was a breeze as well.  I asked for a room with a view of Universal Studios.  Three warm cookies and three free shuttle passes later, we went up to our room.  Now, the room could've maybe used a makeover, but it was clean and on the 7th floor.  We watched the lit-up roller coasters and later, the fireworks both nights right from the window.


As we were walking through the lobby there was the usual cabinet with tourist trap brochures.  One that caught our eye was the "Titanic Gala Dinner" dining experience.  As we were trying to imagine what that might entail, Taylor said "they probably feed you dinner, then fill the room with water..."  That kid has his mom's sick sense of humor!  I watched the Republican Convention while the kids took a swim.

We were up bright and early the next morning because we had two parks to cover.  You see, they judiciously built "Diagon Alley" in Universal Studios and "Hogsmeade" in Universal's Islands of Adventure which are completely separate parks.  So, in order to see both places, you have to buy one-day, two-park tickets at $160 plus tax each adult.  You take the "Hogwarts Express" train to shuttle between them.  They asked for your ticket and fingerprint every time you got on the train and their machines don't always work well.

I decided from all my homework that the meal plan might be a good deal for us.  I got the one with unlimited Coke products, which includes a mug with a computer chip.  You can only fill once in 10 mins.  But later we found out it isn't really unlimited, there are only two places in each park you can get drinks, and they don't really service them so midday on there is no ice and way fewer choices.    The $28 meal plan said 1 meal with non-alcoholic beverage and 1 snack.  We thought that would cover the goofy drinks and snacks in Wizarding World but it doesn't.

For breakfast at Three Broomsticks the sign said eggs, bacon, croissant, hash browns and I think drink for $16.99.  Holy cow!  I told the kids not to use their meal thing because usually breakfast is the cheapest meal.  I was wrong.  However, I asked the witch directing the line and she told us we could get a la carte stuff and make our own breakfast sandwich.  We did that and saved around $40!  For me the trip was getting to be one big cash hemorrhage though.

When we ordered our dinner at the Leaky Cauldron we were told that the non-alcoholic drink was not included because they consider the Coke thing the drink.  What?  It doesn't say that on their promotion materials anywhere!   It very clearly states that drink is separate!  So we had water on principle and sought out the Coke machines. (which has non-pop choices, sort of)  Then, the snacks can only come off street carts and not in "Wizarding World."  We wound up wasting one because we were too hot and tired to care.


The American Express card is supposed to get you a boatload of benefits, but that is all smoke and mirrors.  I did get 10% off the meal plan rip off and a set of coupons that were absolutely worthless unless you wanted to spend yet another fortune.  Plus, we were only spending one day.  You are also supposed to get 10% of shopping, etc, but not in any Harry Potter areas.  If you spend $70 at the Universal Store it allegedly counts.  The kids wanted to buy their stuff in Harry Potter shops like Ollivander's Wand Shop, etc.  However, when I signed up for the card there was a $250 cash back if you spent $1000 in 90 days.  No problem there! (and the cash was instantly deducted when I hit the $1,000.)

Did I tell you it was hot????  Hotter than Bill-Be-You-Know-What and humid.  This was the only time I could take vacation days because I was covering for someone's leave of absence at work.   I knew it would be hot, but this was beyond imagination!  Not only was it hot, really hot, but we had a rainy period and it was so crowded there was very little room to get out of the rain.

We rode the creepiest, most idiotic Dr. Seuss ride ever (a weird "It's A Small World" type but riding on sofas) just to get out of the rain and into air conditioning.  We were there on a Friday and when I say crowded, you could hardly move in either Harry Potter section.  Now the rest of the park was average to kind of empty.  We rode all but one Harry Potter ride first thing in the a.m. and the lines were shortish.  But come afternoon they were hitting 90 minute waits.  Ain't nothing worth that wait to me!

You could go through single rider lines quicker and we did a couple times.  Men-In-Black was fun as you get to shoot at aliens.  But with the rain, several of the big attractions shut down for a bit, so we gave up.  The heat was getting to me...Did I tell you it was hot and muggy??  Our clothes were sticking to us!  However, it appears Ohio had the same weather so I guess suffering was unavoidable.

The next morning we hopped in the car and drove around a bit, stopping at a nice Harley dealership.  We headed back to the airport kind of early, but it was nice to not be in a hurry and we were home by 8 p.m. that night. 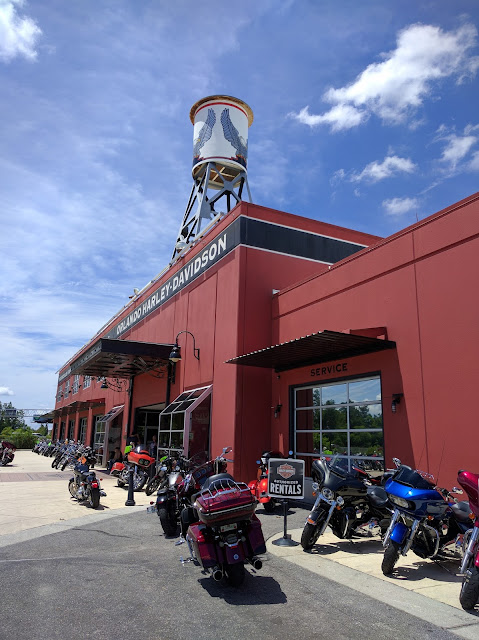 Hi, just seeing if my comment section was working.