Buck-cat or Bear-keye?: When You Can't Be True To Your School

Well, it was a win-win, lose-lose proposition!  Last weekend, my Alma mater Ohio State hosted my son's school the University of Cincinnati and boy was I conflicted!  Taylor is in the Bearcat band so my sis-in-law (and also OSU grad) Mary and I wouldn't miss the chance to go see him.  She had no problem with cheering for the Bucks, but I felt like a turncoat!  (Though we both wore OSU t-shirts, Taylor gave me a UC button to even me out a bit.) 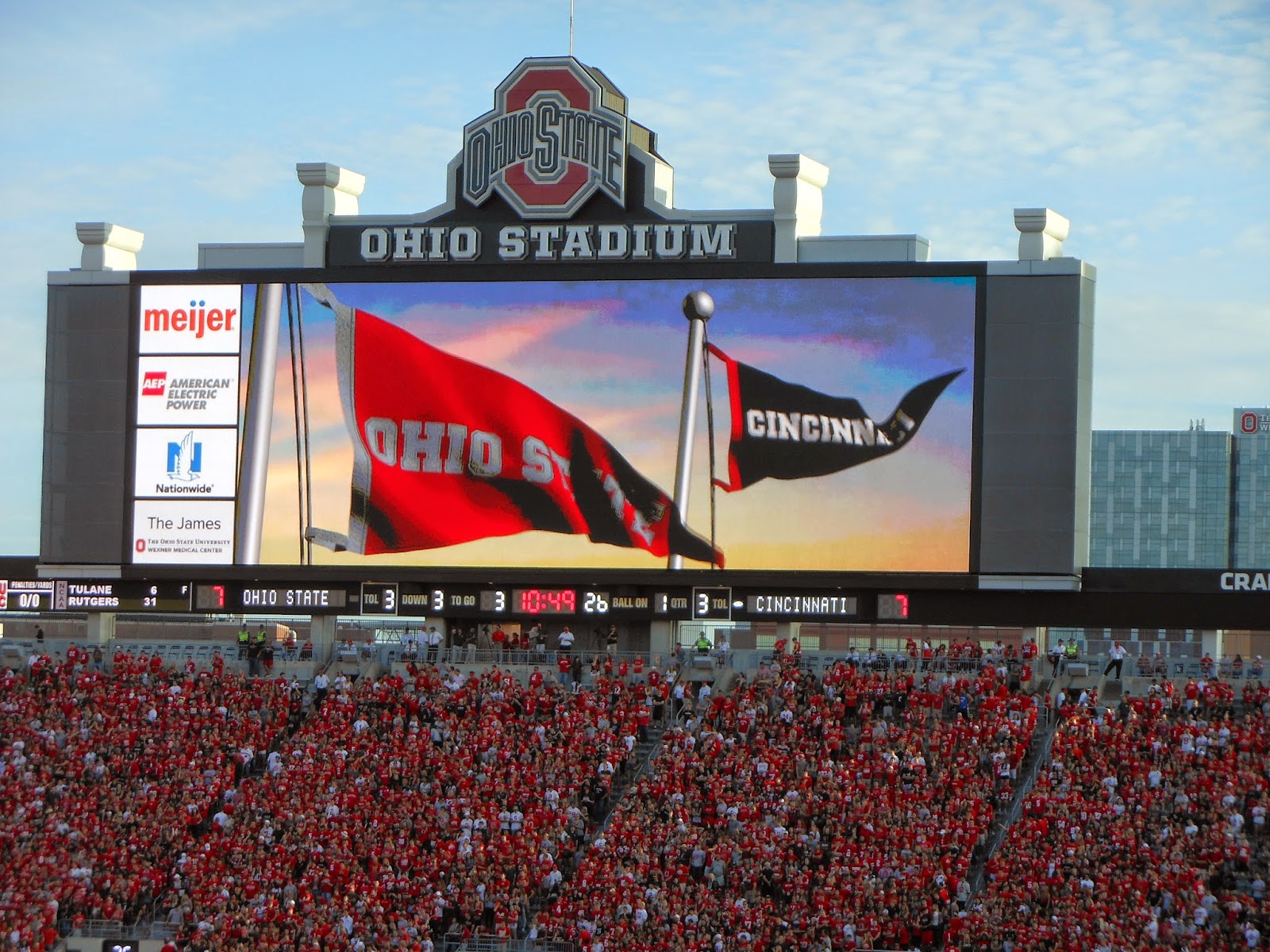 It was a perfect day to be outside, an easy trip in and out (amazing because there was a new record crowd of more than 108K), we had great seats on the west side of the field (no sun), high enough to see what the bands' formations were and not too far from where the UC band sat.  All was perfect except I'd fallen a week or so before and my knees didn't like the climb to C-Deck (for that matter, none of me liked it, but there were thinner, younger people wearing out as well!)  If I didn't have a heart attack then, it was more of a surprise I didn't at the top of the stairs when I was charged $13 for a bottle of water and a Diet Coke!  Found out later I was overcharged (scary when I was waited on by a college kid with a calculator) and it should have been $11, but still!

Things were going great until mid first quarter when two large fellows took the empty seats next to me and instantly folded me in half, while guy sat forward and blocked my view of half the field.  To add to the fun, he slobbered on my glasses as he sat down...I am still grossed out!  Fortunately, they left at halftime and never returned. 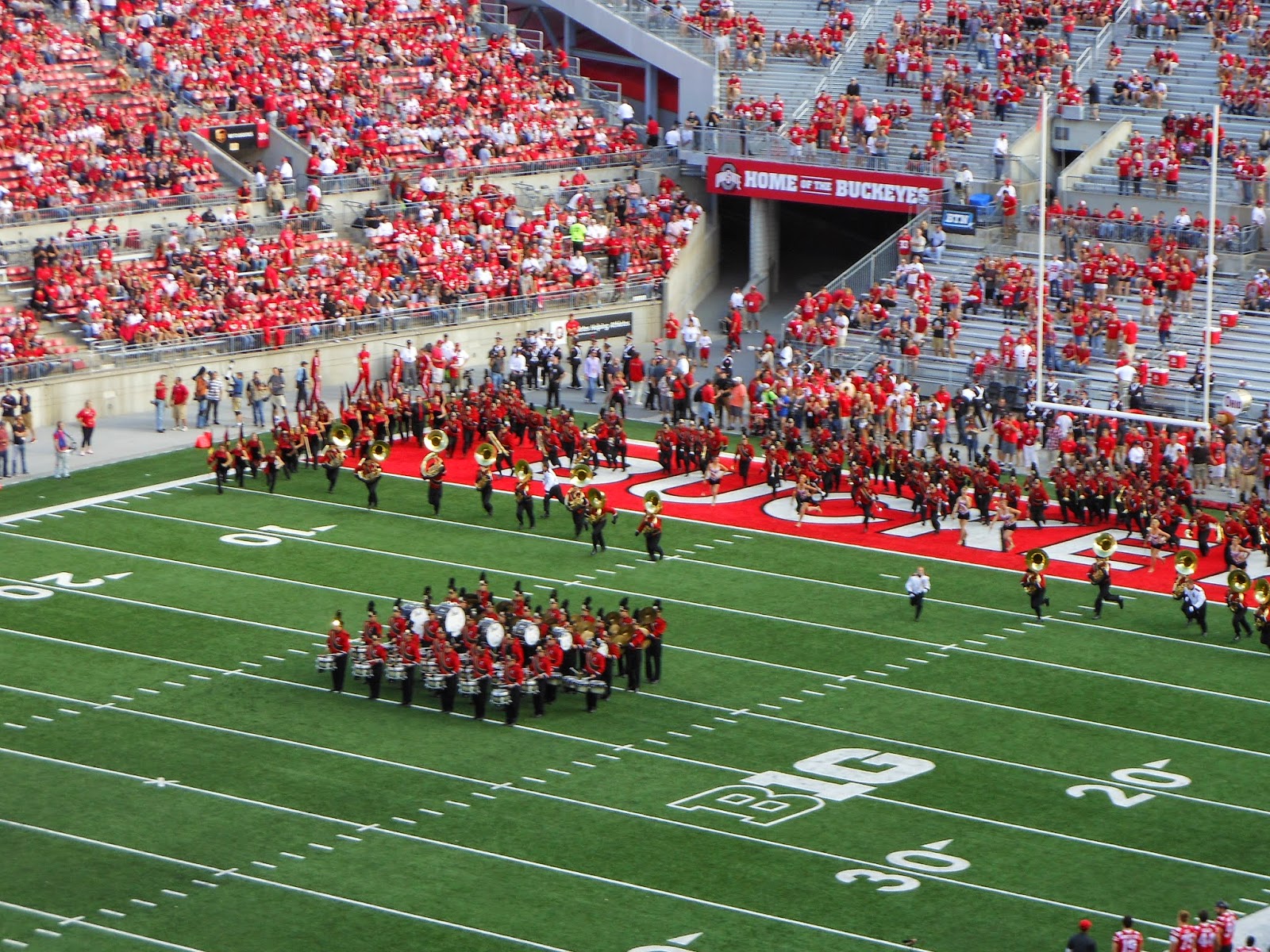 It was a close game until the last quarter when OSU pulled away.  The final score was 50-28.  Those poor ROTC folks had to do a zillion sets of push ups.  Every time we (ummm OSU) score, they do the whole total!  At the end of the game, Brutus Buckeye comes out and does one set, but he did 50 with no problem. 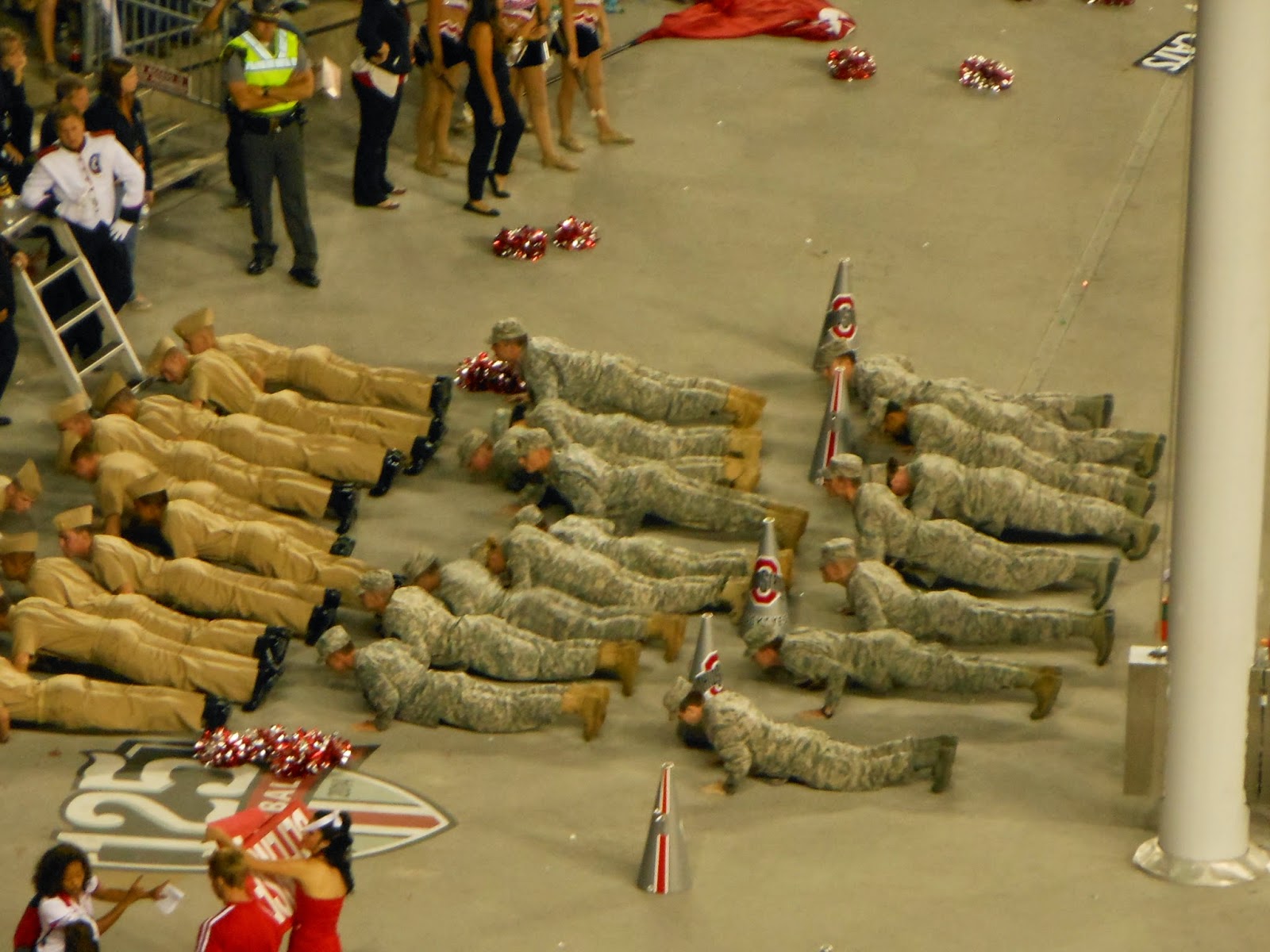 A drunken kid ran out on the field and got tackled by a coach, which watching it was no big deal, but it became a media-frenzy.  So much better stuff to report, but whatever.... We'd never heard of Ezekiel Elliott either, but I'm sure we will from now on!

Not to be outdone.... Audra performed her Ohio Wesleyan Senior Recital the next day on the horn.  I will report on that in a future post.  Needless to say, I'm proud of my kids and pooped from a wonderful weekend!

Until next time, enjoy the leaves as they turn!

Gale
P.S.- After all that "suffering," Taylor told me that it was fine to just cheer for the Buckeyes!  LOL.  Audra and I will be traveling to Paul Brown Stadium in Cincy in a few weeks to watch a UC home game.  What a relief to cheer for just one team!  (But I still haven't seen an actual bearcat...)