I was sitting in my swing this morning while Karma was rolling around and chomping on a corn cob when I realized she will be 14 years old in a few weeks.  Like the rest of the Jack Russell pack, she appeared one day without warning (OK a couple of the others I had a tiny bit of warning.)  Mark firmly believed in the "it's easier to ask forgiveness than permission" way of life.  When he brought Karma home though, it was "She'll only be here a few days until we can find the right spot for her.  She's extremely valuable and everyone is trying to get something from this litter..."  That was nearly 14 years ago, but who's counting????  Me.

Everybody that shows dogs winds up with at least one Karma.  She's the one you keep for lack of a good enough reason to place her.  She is a bit of a clown and you can't stay mad at her even though you really want to.  She doesn't hold grudges either as that would require thought and she doesn't spend much time thinking.  Well, come to think of it, we did have several reasons she stayed--she couldn't live with cats or any other housepet you wanted to live another day; though a  JRTCA Bronze Medallion dog who liked to hunt, she wasn't that good at it and her chest blew too big to be able to get in holes (also ending conformation successes); she has horrible sun and grass allergies (perfect for a working dog...) and once spayed she had no breeding value to anyone else.  Which was fine.

She acts the same as she did as a puppy, without a doubt the most athletic dog I've ever lived with.  She can jump on a grooming table flat footed.  She still runs, but in no particular direction because she can't see anything but shadows.  She's happy that way and at this point why put her through cataract surgery?  Seeing for her wouldn't change a thing.   She sleeps 23 hours a day anyway.


Her only real asset (besides being one giant muscle) is that she was the best "show pony" you could ask for.  You could stick a toddler on the end of the lead and she would show like a million bucks.   We know, because we did.  She really wants to please people.  A credible theory in this house is that if you want a great show dog, they have to be dumb.  They are always "happy, happy, happy" and wagging their tails.  We had several super smart dogs that hated showing because they saw no point in it.  Her other asset is she very clean and if you let her out enough, you don't have to clean up her pen.  Often, that is my incentive for getting up in the morning!

Now for the "Bad Karma." Although she doesn't get the title of "dumbest dog ever" because that went to her full sister Credit (who we did manage to part with!) she runs totally on adrenaline.  I once figured out through all the terrier fights over the years we always blamed the other bitch and got rid of them.  She was involved with the barn cat killing and was a perpetual "me too" dog when they took off or whatever.  For a funny story, see "A Hunting We Will Go" listed in the index. 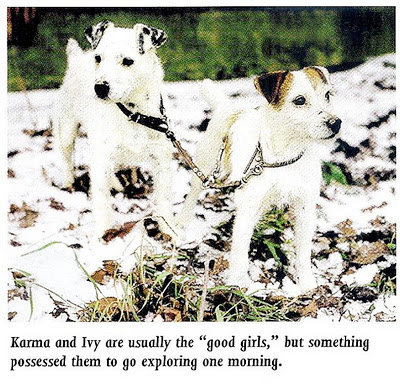 I remember someone coming over to look at her several month old puppies and wanting to see her. While normally decently behaved in the house, she proceeds to grab a pillow off the sofa and destroy it right in front of us.  That went over well...

Over the years she has developed a tolerance for my toy dogs.  Carrie thinks it's fun to bounce off her and I am always amazed at the restraint Karma shows.  Of course, I never leave them loose together!  She was a good mother and an easy whelper!  We loaned her to her breeder for a litter (who is a vet) and unbeknownst to her and her hubby, Karma was whelping while chasing tennis balls.  She would get the tennis ball, run to the whelping box, spit out puppy (but I doubt the ball,) hid the pup under newspapers and then took the ball back for another run.  She had two puppies before they realized what was happening!  Karm was staying at another friend's house and went briefly missing.  She was found with her head sticking up through some perfectly manicured bushes she appeared to be sitting in.  Inexplicable how she got there...

So for better or worse, Karma is here to stay and likely for a long time.  So Happy Birthday Karm!

I remember hearing about her before. So the old girl is still around.
Cher Sunray Gardens