Gale's Gallery V: Don't Be Afraid of the Needle!

Remember, the theme to this series is "Art Anyone Can Do!"  It may look complicated, but if you break it down in to steps and not make my mistakes, you will be fine...
As I've said before, enough people tell me what to do all day that I can't stand to follow instructions when I craft.  So, I'm a permanent student of the "art school of hard knocks."  One never graduates!  Some things are set in stone, but most aren't.  (Like using more than 3 colors of paint blended will usually make mud.  Though that is fine if it's the effect you are going for!)
So how do I do these cross-stitch pieces you ask???  The easiest way I can!  Not necessarily the quickest, but often the most stupid-proof.
I have refined my method a bit and may even try something different with my next project.  It will be a portrait of my darling Japanese Chin.  Only this time, I'm going to use fine yarn and brush it out so it will have the texture of hair (I hope.)  It will be sort of like the Japanese technique called "bunka," but my winging it version.
Below is Patrick, who winds up in lots of my art.  (Mainly because he was the only one kept in coat long enough to get good furnishings!  He is also a lovely, typey yorkie.}  You are going to think all my art is about pets, but it's not really:)  People are hard to do, so I leave it to the experts! 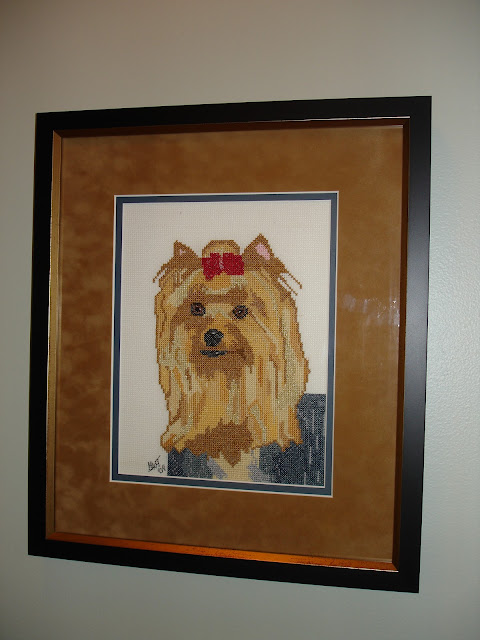 "Patrick"
This is actually my third project using this method.  It's best to start small and simple, though I usually don't.  I'll try to break it down into steps:
1)  I had a professional photo of a nice breed win, but I hated what I looked like in it.  Rather than pitch it at $25 a crack, I decided I had to use it for something.  So I scanned it and cut myself out, focusing on just his head.  I enlarged it so I could see details.  It doesn't matter if it gets blurry because it's just for reference.
2)  After I decided on the size (this wound up taking 2-3 months to stitch mind you...) I laid Aida cloth graph paper over it and traced as much detail as I could using a black Sharpee marker.  Aida cloth is the canvas you sew on.  Now it comes in lots of colors.
3.)  I used colored pencils to roughly determine the color scheme.  I bought a ton of embroidery floss in many shades, even if I didn't think I'd use them.  They're really cheap and it's better to have too many then to drive back into town wasting gas!  Plus, they say "variety is the spice of life!" 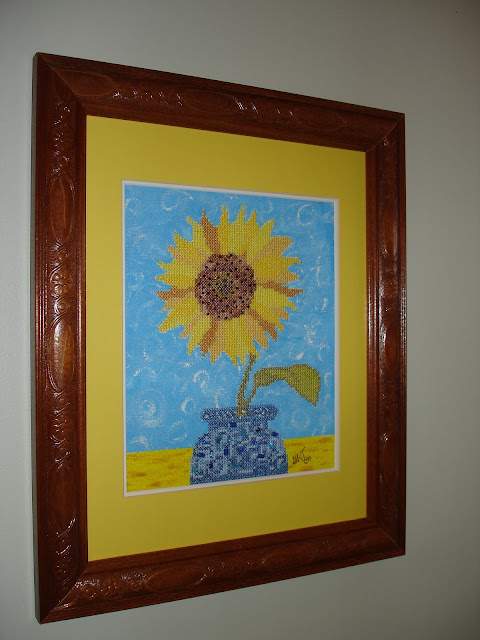 "Sunflower"
This project helped me pass the time of a whole summer when I was too weak to do much more than sit in a porch rocker.   (I'm fine now!)  The background is actually painted and there is quite a bit of beading.  I drew the sunflower by tracing a coloring book page and free-forming the pot.
4) I clipped both the picture and the graph artwork to the actual Aida cloth.  I use either 11 or 14 squares to the inch, depending on time and necessary details.  Then I just flipped back and forth counting the squares.  I think it's easier to start in the middle and work out if it's possible.  That way a boo-boo might be salvageable.  I am going to try using overhead projector transparency sheet (note: there are two kinds, copier and inkjet) and print the photo of the Chin.  I will probably use glue a second clear sheet to it to protect the artwork from any smudges.  Since the dog is just black and white, I think this is a good time to experiment. 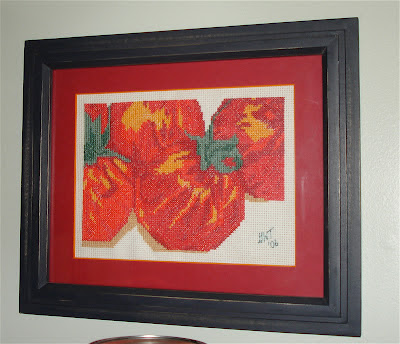 "Tomatoes"
One thing I really like about needlework is it's portable.  When my friend Barb was in the hospital for several months, this was great for the waiting around.  I used the method above, but drew this off of a seed catalog.  This was a new variety of tomato that year.  Pretty, but I still don't like tomatoes:)  Instead of double matting this, I just ran an orange marker along the inside of the beveled edge of the red mat.
5)  Sometimes I wanted to blend colors and didn't have the intermediary floss.  So, I took a strand of each of the two colors and used that.  It's sort of a tweed effect and I like it as you can play with which thread is on top.  It wasn't exactly blending, but I thought I was pretty clever!  I nicknamed it the "Thompson Tweeding Method" LOL!
6)  Once you finish a piece that has taken forever, don't be stingy on how you display it.  You can buy whatever frame and get matte or regular glass, but if you aren't adept at blocking and applying the canvas to sticky backing board, leave it to a professional.  They don't charge much and it's worth it not to look "wonky."  You can buy your own matting or have them cut some and put everything together yourself and save money.
7)  One very important aspect is to hide your starting thread and your end knot.  Those little things tend to pop out to the front.  Also, be neat and tidy on the back.  It doesn't have to be perfect as nobody will see it, but it makes a difference if it's lumpy.
BTW, when I was looking for supplies at JoAnn's I saw this new stuff called "Color Infusions Memory Thread."  It's a washable thin copper wire covered in thread.  You can't stitch with it, but you can "couch" or stitch it in place to make embellishments/add dimension.  I can't wait to try mine!  For more info:  dmc-usa.com
Stop back and see what I get done with the Chin project!  I will try to take work in progress photos.
Until next time,
Gale
Quote of the post:
"Seven days without laughter make one weak." ~ Joel Goodman
PS:  The word "chocolate" was in the body of my last post 23 times!
Posted by The Darby Creek Diaries at 8:52:00 AM

Your work is lovely Gale. Will be interesting to watch your next project.
Cher Sunray Gardens
Goldenray Yorkies

I like your cross-stitch pieces the tomatoes are interesting how it stands out so well it must have been hard to do. You are very crafty.