I became a "knit-wit" late in life, but I've always been a bit of a nit-wit...  Today instead of telling "yarns,"  I am going to knit and crochet them!

My Grandma Hinkston taught me to crochet when I was in third grade.  I made the classic first project:  a somewhat "wonky" potholder.  I tried to make it square, but it always sprang back to it's original amoeba-looking shape.

Rule One: I quickly learned that one has to keep the tension consistant and to be careful not to miss a hole in the chain.

My second project was an odd colored gold baby blanket that I gave as a present to my sister.  Not too bad for a third grader, but there were other lessons to be learned the hard way (in fact I still haven't learned it, though I know better.)

Rule Two: Always buy enough yarn in the same dyelot to easily complete your project.  To this day I haven't done that.  I try to be fiscally conscientious with my crafting supplies and this more often then not comes back to haunt me.  I can't count the times I've had to go get more just to finish off a couple rows.  I've also even dyed yarn trying to match mis-matched dyelots with only moderate success always having to dye the whole project.  The color doesn't always soak in the same!

I was probably 40 before I finally got up the courage to knit.  I thought it was too hard.  I guess I found two needles intimidating.  My dear friend Barb taught me how to knit a dish cloth in one evening while we were at a dog show out of town.  There are really only two stitches, knit (also called stockinette) and purl.  It's the sequence that makes the design.  It's actually easier now for me to knit because you can see the stitches more clearly than crochet.  This really helps when you are using dark yarn as it's hard to see. 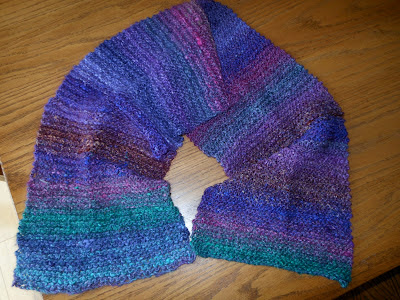 Here is an early project using self-striping Noro yarn.  There is a matching hat somewhere!  I have used this yarn a lot.  It comes in many colors at yarn shops.  I think it's a silk/wool blend.

I always seem to wind up in hot water (not good with wool!) when I start a hobby with a project that is over my head.  In this case, a sweater Barb's daughter Janet had just started but didn't want.  It was going ok with the rib knitting and all, but I later discovered I was knitting backward.  (Yep, only I could do that!)  So I made it part of the design.  That would have been fine had that been all.  But, along with having to get more yarn (wrong dyelot of the offwhite), when I went to attach the sleeves I realized there was no armpit room and only a stick figure could wear it.  Well, I dyed it turqoise and that came out alright and I thought maybe I could find someone skinny enough to be able to use it.  I never have.

Whenever a friend has a baby, I try to knit it a blanket.  Other than that, I had moved on to other crafts.  But I got the "itchy fingers" around Christmas and found a nice grey wool yarn in my stash that matched Mark's dress coat.  So, I knitted him a keyhole scarf.  Of course I liked "using up" my stash, until it became clear I was going to run out.  I had to buy another skein, the price had gone up dramatically and now I have a partial skein in my stash.  Pretty much back to square one...the story of my crafting life! 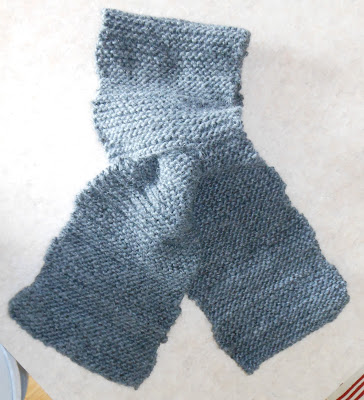 This is the keyhole scarf I knitted for Mark.  Knit as long as you like, then cast off 1/3 of the middle stitches.  Cast them back on in the next row.  This is Lamb's Pride wool from a yarn shop.

My niece Abby asked me to teach her to crochet Christmas Day.  I quickly went over the basics and she said she would practice, then come back.  Well she came back a few weeks later with an awesome scarf/neckwrap of her own design!  Very impressive and I am a proud Aunt! 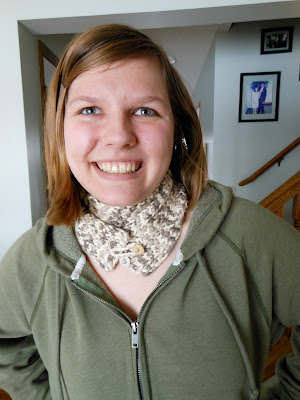 This is Audra (Abby didn't want to pose) wearing a crocheted scarf that was Abby's first project and an original creation!  Great job!

Rule Three:  I don't want to seem snobby, but I am a bit of a purist when it comes to materials.  Whenever possible, I think it's best to use natural ones, even if it's a bit more expensive.  I can't remember who said this, but one TV crafter said, "If I am going to spend hours of my life creating something, why wouldn't I use the best materials available?"  I love the feel of real wool, silk and cotton as well as some of the exotics that I rarely use or can afford in large supplies.  Also, those materials breathe and polyester, etc. (aka plastic) doesn't and if heated will melt and burn into a puddle.  That's just my two cents... 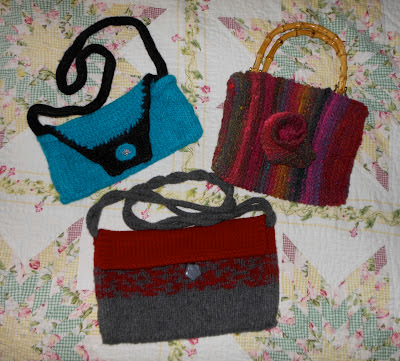 Here is a collection of quickly knitted gifts.  Please see the Gale's Gallery featuring these for instructions. 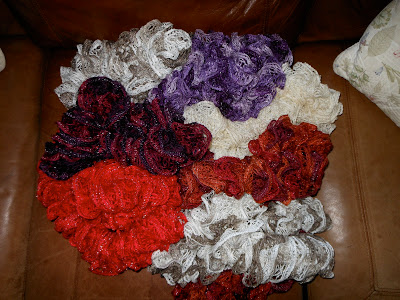 If you haven't knitted, I hope you'll give it a try!

Until next time,
Gale
Posted by The Darby Creek Diaries at 8:48:00 PM

Yep think it's the next thing I will work on myself. :) Did crochet some chair bottoms some years ago, but need to find something more for winter projects. Trying to catch up a little. Still behind with all the work here but wanted to drop by.
Cher Sunray Gardens

Well, I am embarrassed to say that I do not have the attention span for the concentration this would take. Your key hole scarf is gorgeous, Cuz! I am impressed with your niece, as well. What a great thing for you two to share!