Here's hoping you all had a pleasant Thanksgiving weekend.  Aside from the gloomy Ohio weather all but one day, we had a good time seeing lots of family and eating too much.  I started to decorate the henhouse, but that's as far as I've gotten.  As long as I can enjoy lights somewhere, I don't feel as inclined to put mine up LOL!   So...

Friday evening Mark, Audra, Taylor and I drove about an hour away to Young's Dairy Farm for dinner.  It's a good home-cookin' type restaurant and usually very busy.  As you might guess, they have great ice cream.  We split a buckeye sundae and it was delicious.  They bring out apple sauce, cole slaw and apple bread with every meal.  We cracked up because we were nearly the only ones in the parking lot that didn't have a tree strapped to the roof of the car.  If you are ever near Springfield, OH, or in the Dayton area,  I recommend you try it out.  Their website for more info is:  youngsdairy.com.

Less than 10 minutes from Young's is the Clifton Mill, a 19th century gristmill.  Between Thanksgiving and New Year's they host a huge light display.  I read about it in "Midwest Living" magazine, so suggested we go there.  It isn't very big, but cute, especially for little folks.  Mark took some photos for you from his new phone... 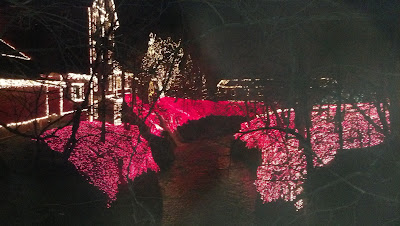 They declare there are more than 3.6 million lights﻿ on display.  There is an hourly light show at the covered bridge, sychronized to Trans-Siberian Orchestra music.  Santa Claus works in his toy shop, but comes up the chimney to say "Hi" every few minutes.  An enormous miniature train track winds through several themed areas.  Next to that, the Ohio State Marching Band does "Script Ohio" in tiny figures in a little stadium.  They claim to have the nation's largest collection of Santa stuff.  Frankly, we thought some of that display was kinda creepy, sort of "Chuckie" Claus looking!  There was quite a line for it.
Here we are in front of the mill: 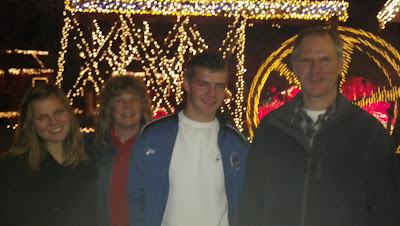 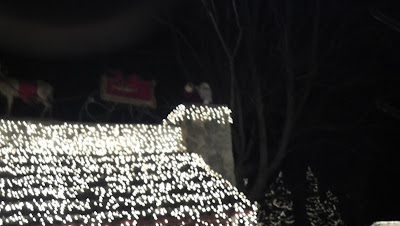 There is permanent restaurant, gift shop and bakery on site, but we didn't eat anything after just pigging out at Young's.  They must do something right as the place was packed at $10 a head (if you were older than age six.)  Definately something to do once.  For more info: cliftonmill.com or 937-767-5501.
View from the other side... 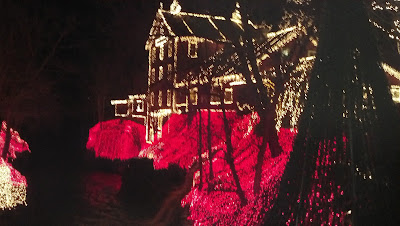 See you next time!  I am planning to post a humor story (just in case you are missing them...)
Gale
Posted by The Darby Creek Diaries at 4:10:00 PM

That is some display. Heard about it before and it's beautiful. Gale I can't believe how old the kids are. That must make us antiques. That is a lovely family group photo too.
Cher Sunray Gardens
Goldenray Yorkies

Thank you Cher! Yep, Taylor is in driver's school! Anything (one) more than 50 is antique isn't it? LOL So I guess we are. That doesn't mean we'll ever grow up though! You really ought to see the mill, it's really close to you.

Wow! That is just breathtaking! I love Christmas!!!! New follower here from the blog hop! Nice to meet you!

Right back at ya! Welcome to "The Creek." I hope you will enjoy it!

Beautiful!
Following you via Weekly Book Blog Hop. I am your newest GFC follower.

Have a Blessed Day,
Patricia aka Mamaw

Hello darling, we are following you now. Please have a looksy at our site too. Blessings!btw, love this blog!
http://www.faithfulcafe.com

Hi, I'm your newest follower, hopping by from the BSN blog hop. Love the lights, beautiful!