ON YOUR MARK…GET SET…OH NO!: My High School Track Team Adventure 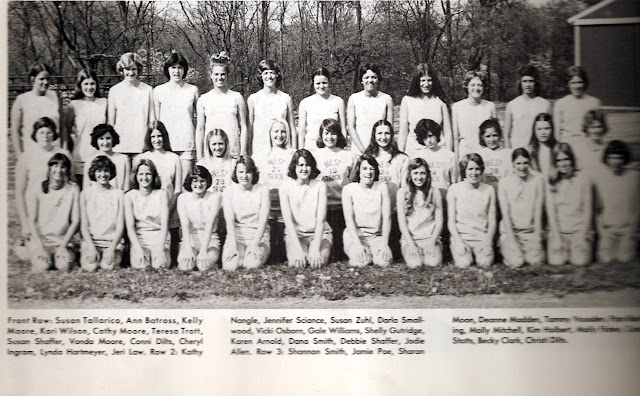 I'm in the center of the middle row (circa 1976).
I hate to run.  Always have.  My side cramps and I’m so slow you could clock me with a calendar.
Except for being “good” at softball, (I had to hit home runs just to get around the bases) I’m no
athlete.  Back in high school, my best friends Julie and Carole talked me into joining them for
track “try-outs” to get in shape for swimsuit season.  (A couple decades later they both are
size 6 and still run daily.  I park as close to the supermarket as possible.)  I’m not sure I
officially forgave them for the hours of blood, sweat and tears I spent training, especially after
they quit!  They apparently got into the shape they wanted the first week.  I never did.
I don’t remember why I stuck with it.  I must not have quit in time and they needed bodies...ANY bodies.  Actually, my dad wouldn't let me quit.  Something about building character I think.  Of course, I wasn’t “first” team.  Just an also ran…pardon the pun.   I didn’t get one of the new “cool” powder blue uniforms.  I got a ratty old one that was dark royal blue with a dingy warm up suit; making it even more obvious I was a leftover.  The first several practices we had to run what seemed like a hundred miles through the countryside…always uphill.  I just prayed I’d make it back before dark.  Sometimes I would turn back early to even do that!  If somebody ran or drove by that I needed to impress, I’d run like a regular person until they disappeared and then nearly drop over.  I made a feeble attempt at shot-put and discus so I wouldn’t have to run anymore.  That didn’t always work as I was still occasionally pressed into service in hurdles.  Since I was a cheerleader that year (lots of spirit and a big mouth), I tried to look at it as a series of bucket jumps.  This would have been easier had I owned cleats, which I didn’t.  But, I actually beat someone once anyway!
At a really important meet against the “big city” kids, (if you can call Zanesville, OH a big
city)one of our relay team members got hurt.  Now, I don’t recall the point system, but apparently our team was desperate.  They needed ME.
I was happily lounging around when a few of our top team members came up and asked if I
would be on the mile relay team.  I almost choked on my Fritos.  “Who me?”  To seal the deal,
they said I could walk it if I wanted.  I just had to finish.  For the first time ever, I felt like
“running” (AWAY, that is.)  I was shamed into a yes by visions of teamwork, apple pie and the
American way.
It was only a quarter mile…just one lap around the track.  No big deal, heh, heh.  Since it was the last leg, I at least couldn’t get lapped.   It was also the end of the meet so, thankfully, there weren’t many people watching.  That measly one lap seemed like it took forever.   Of course, my pride made me run as fast as I could and I finished the race.  I bet it was the slowest lap time ever recorded in the history of high school sports.  We got the points we needed and for the team (and everybody else it seemed) it was quickly forgotten.  No ticker tape parade or anything.  Like it was just expected…
But I remember it because I actually finished a running race and helped a team I wasn’t even qualified to be on.  Every time I flip open my yearbook and see myself in the center of the team photo, (with the other dingy warm up suits) I remember.  And now, I even laugh.  Jul and Carole, I forgive you!
-30-

Nice memory thought Gale. Now you need to crop your photos to only 4 inch width to fit on this blog.
On another note, another blog? It's hard to get followers on one and will be worse with another. There's nothing to say you can't add crafts to this one as well as gardening. Gives you more areas to attract others.
Cher Sunray Gardens
Goldenray Yorkies

I copied this from Word (it is several years old) and was having a terrible time with the print. I was afraid the photo would get too small for the folks that went to my high school to see. (For some reason, I get comments on FB from folks that read it fairly often, but don't follow. I wish they would!) As for adding the crafts, I was afraid that would turn off the non-craft types. You don't think so? I still have so much to learn about this blogging thing!