"Fowl Play" aka Chickens in my Basement

Hello!  It's supposed to be 90 degrees today, but humidity is already 90+%.  (See Weather Wars for more complaining on this issue.)  The "girls" are shaded but still in temporary dog compound until their mansion is ready.  They come back into the basement at night.

In case you haven't heard, I ordered 10 funky looking hens that I picked up as day-old chicks the day after Easter.  (I was on a several month waiting list!)  They have really been a blast and not that much work until now.  You see, I didn't realize just how fast these suckers grow!  They are nearly full size and some will soon weigh more than my toy dogs.

I have them snuggly in a 10 x 6 ft dog pen in the basement, which was fine a few weeks ago.  With Audra's graduation party stuff we just couldn't get the coop built fast enough, though Mark and Taylor have worked diligently.  I just wanted something simple in our pole barn, but Mark didn't want them in there, so he has spent $1200+ in materials to make this chicken palace.  How does that commercial go???  Fancy Chickens w/shots- $40, Coop- $1200, Eggs, Entertainment and Poop= PRICELESS!

If (when) I get mad at him,  I know where I can go.  I have helped a little, but it seems to be a guy thing.  So, Audra and I will do the "decorating" and painting.  The outside will be white to match the house, with a flower box under the window (yes a new opening window complete with screen.)  Inside we will make it a chick hangout probably like a pink bedroom.

Let me introduce you so when I mention them later, you will know to whom I am referring (is that correct grammar?)  These will be photos of them as "teenagers."  I will post baby pics soon. 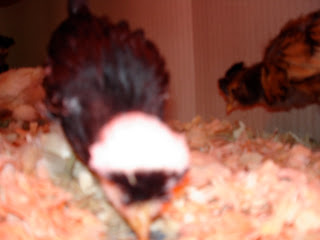 Isabella Cruella- Appenzeller Spitzenhausen hen who was the inspiration for Cruella DeVille's design.   She is friendly and quite an escape artist.  She flies better than most, but prefers to find tiny holes under the fence to crawl under.  The official breed of Switzerland.  Now I understand why they are a neutral country. 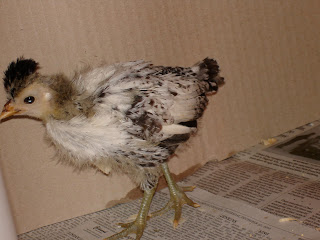 Henrietta- Americauna "Easter Egger" hen who that can lay multi-colored eggs.  More like a dog than a chicken.  By far the most "humanized" sometimes comes when called.  Started off being called "Leopard Butt" due to her markings. 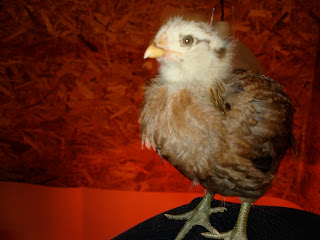 Petunia Madeline-  Buff Brahmin hen who started out the smallest and is now the biggest.  Very soft and sweet personality. 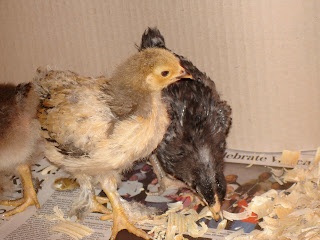 Megg-  Partridge Cochin hen, not all that friendly.  Used to get picked on by Bonnie who is way smaller.  She appears to have the worst case of cow hocks I've seen, but it could be her feathery legs/feet.  She is fun to watch run.

Bonnie Blue- Blue Cochin who is the runt.  Hope she isn't really a bantam. 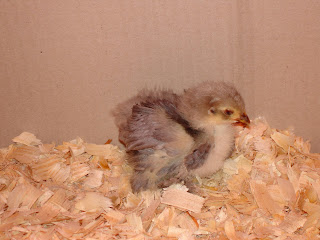 Sylvia Scarlett-  Silver Polish hen who is really black and white to me.  The coolest topknot, pretty friendly and adventurous. 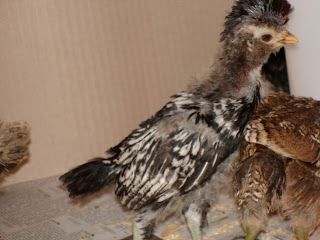 Penelope-  White Cochin who scared me when I found her on her back with her feathered feet sticking up in the air.  Thought she was dead or hurt badly, but all she needed was a push so she could roll over.  What a sight that was. 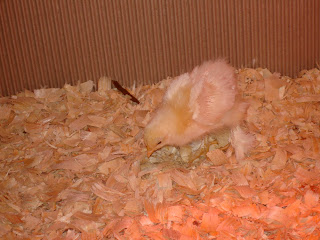 Olga- Black tipped Golden Polish hen way bigger than the other two and very outgoing.  Like Cher and Liberace, she only needs one name.  Acts like she is from fighting stock with her tail straight up in the air. 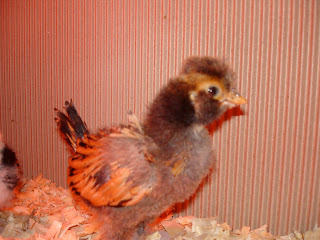 Last but not least...

Gloria Maranda- Cuckoo Maran hen who looked like a penguin initially.  Gloria is from movie "Happy Feet."  She was standing on top of the basement pen last night.  Not a good thing.  We must get coop finished asap! 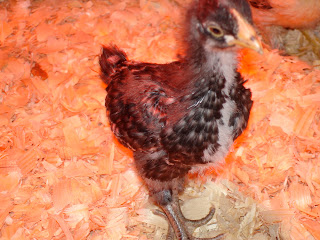 Well, you're probably tired of reading, so take care until next time!