Hope this finds you well and getting ready for the big 4th of July weekend here in the States!  Please, please leave your dogs at home in the delightful air conditioning/shade/quiet solitude while you enjoy the festivities.  The heat, hot pavement, loud noises, big crowds aren't as fun for your dog as they are for you.  They don't know they aren't getting shot at and picnic food isn't good for them either.

That said, somewhere I have an article that is at least 10 years old that says virtually the same thing as a post I shared today on Facebook from fellow dog person Barbara Bedsted... please click on the link below the diagram for the complete article.  So this is not new, earth-shattering news... 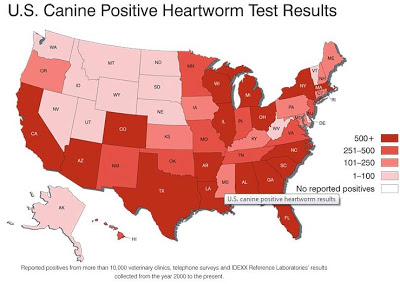 I have known hundreds of dog people and their dogs/kennel management styles, etc.  I have only even ever heard of ONE dog contracting heartworm and it was a rescue I was told about.  Now I am certain that if left untreated it is an awful thing to go through, but pumping your dog full of unnecessary and unbelievably inflated priced "preventatives" is bad for everyone but the manufacturers and sellers.  There was a point where I was spending $100 once for basically cheap ivermectin wormer and that wasn't retail price (for only 3-4 dogs a few months worth.)  I have many vet friends that I adore and I don't want to hurt how they make a living, but here is the truth in it's simplest of terms---

There is no "preventing" heartworm.  Even if you do the heartworm meds,  the ivermectin will take care of any possible larvae that the dog has already contracted through a mosquito bite.  So, it is retroactive.  The larvae take 3 months to develop in to anything worth killing, and 6 months to become a problem,  so instead of monthly drugs, once every 3 months is fine to medicate if you feel you need to do so.

What irks me and always has, is that even if you go for the ridiculously overpriced monthly concoction and stayed on it a year, your vet will insist on an annual blood test (was around $30/dog) before giving you more pills.  Really?  If it works, why?  If you miss giving it even one month, you have to do another blood test???  The blood sucking analogy is not lost on me or hopefully you.

Also, if you live where there aren't many mosquitoes or your dog is never outside, especially during mosquito hours (dawn/dusk) they have a better chance of getting struck by lightning then getting heartworm.   Also, the mosquito has to have bitten an infected animal to even be able to transmit heartworm.

When our family had a working kennel and at times 16 dogs/puppies there was no way that we could afford to have everybody on the standard protection protocol.  But, I was a leary of totaling going without treatment because if anyone really could get it, that would be our luck.

So, many years ago I was given a tip (now widely available online) that has saved us a ton of money, albeit still drugging up the dogs unnecessarily (not puppies or bitches that were bred.)  All but one of our dogs lived well into their teens and the other was a golden with cancer.  We had mosquitoes, but nobody got heartworm.   I was treating every month, then I went to every few months.  We don't have mosquitoes in Winter (another huge waste of drugging--only needs done in Summer months.)

This protocol has stood the test of nearly two decades, but I am only passing it along as an alternative as I am not a Vet (and incidentally, never played one on TV):

1.   Go to TSC, Farm and Fleet or wherever and get Bovine Injectable Ivermectin.  I bought one $35 bottle, refrigerated it and never wound up using it all in many years.  It is generally locked up in a case....  Get a small dose hypodermic needle too.

2.  Get some braunsweiger (sp) or something that consistency.   Ball it up and make an indentation in it.

3.  Every 3 months:  Fill the needle with .1 cc (that is point one cc) for every ten pounds.  Drip that into the indentation (it will only be a few drops), seal it up and the dogs will suck it down.

There, they will be wormed in the process as well as treated for heartworm.  You just spent pennies on the dollar.  Plus, you can feel guilt-free about it!

Have a safe and Happy Fourth of July!