Gone to the Dogs I: Memories of My "Golden Years"- Part One 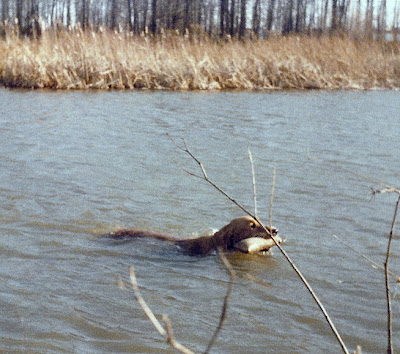 "Windi" doing what she loved (except she hated birds pecking at her face, so we did field dummies.)

People usually end life in their "golden years."  I actually began mine (well at least my adult life) with them... eventually, lots of them...

Part of the reason there has been a long gap between posts is I knew getting into this topic would be bittersweet and that concentrating on memories so long ago would take time I haven't had.  Also, it meant sorting through 100s of photos, only some that I actually have done.  That said,

Everyone who loves and/or owns dogs will eventually wind up with a favorite (or 2 or 10...)  Generally, they have a unique quality that just sets them apart.   I was incredibly lucky to have a Golden Retriever named HIT Winvale's Rising Sun of Garan, CD, PC, TT (1981-1991) and I miss her to this day.  She not only was important to me, but she touched many lives and was just plain cool.  She was smart, following commands to the letter.  However, sometimes that would get us into trouble...more on that later. 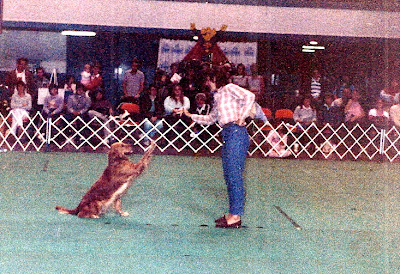 "Windi" waving at the Gaines National Superdog Competition half-time show.  She did all the usual "parlor tricks,"  then we'd bring out the cool stuff.

"Windi" was the best $200 I've ever spent.  She was my second obedience dog and frankly, we kicked doggie butt.  She was either High-in-Trial (or in a run-off for it) or at least placing high in huge Novice B classes.  Unfortunately, I learned early on she had mild hip-dysplasia ending any conformation shows or breeding and though she was trained, I didn't let her do the full jump heights to compete for higher titles.  This was very disappointing because "The Complete Golden Retriever" by Gertrude Fischer has photos of nearly every dog in her pedigree, most in the Show Dog Hall of Fame, and I had high hopes for the show ring.  But she excelled in other things, including qualifying for the Gaines National Superdog competition, which as a college kid, I couldn't afford to go that year.  However, fate had us appearing at that very competition at Long Beach Arena a couple years later as a featured trick dog demonstrator in their half-time show.  That's a tall order considering everyone there is a great dog trainer! 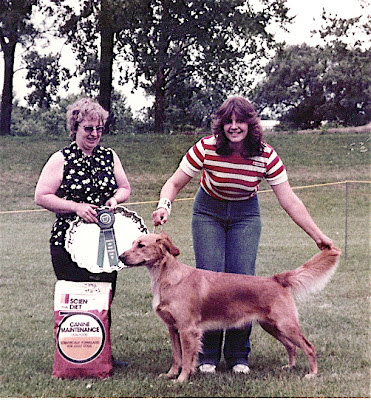 I met "Windi" at an obedience class that my Lhasa Apso "Mindi" and I were taking.  "Windi" was 4 or 5 months old and just brought along for the ride by the instructors.  I loved her immediately.  She was smart, endearing and incredibly impractical for a college-age couple living in an apartment.  Intelligence and practicality has never gotten in my way, so of course I bought her! 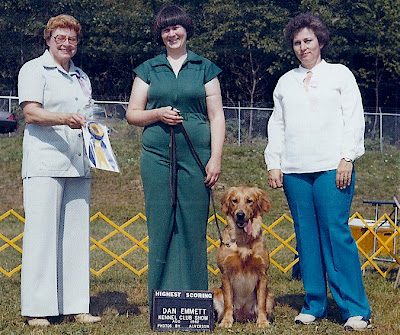 Breeder Mitzi Kirkbride handled her while I was away at a wedding.  They did great!

Here we are in Mexico, Tijuana or Ensenada.  I'll have to write about those trips later.  I don't have any desire to go back...

Our journey started in Zanesville, Ohio, but right after I graduated from OSU, we moved to southern California.  (See sentence regarding intelligence and practicality...)  We started looking into TV/filmwork right away and of course "Windi" found an agent before I did.  She was the stunt double for Purina back when they had a "Hi-Pro Glo" dog.  We also belonged to several dog clubs who asked us to perform, often asking me to tell her to do something that meant teaching her on the fly.  She did exactly what I told her and even I was impressed when we pulled it off.  For example, someone wanted her to crawl.  Well, she knew the signal for down and the signal for come so I said sure (hoping it would work out.)  I signaled down, then come, then down and, by cracky, she crawled to me!  She also walked other (often unwilling) dogs on a lead.  She would dutifully keep tugging even when the other dog dug in...)  All in all, she did more than 100 hand signals/commands.

The many faces of "Windi" the wonderdog.... 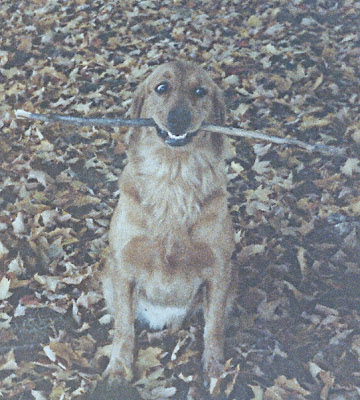 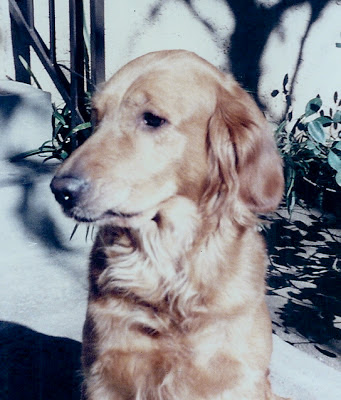 "Windi" and I spent a lot of time on the beach.  We had permission from the Malibu Park Rangers to practice water rescue.  I would have someone fake drowning and send her out with a life ring attached to a cord and she would bring them in.  She never really had to rescue anyone as it turned out, but being able to send her with things was a real help.  She used to carry gallon jugs of milk up three flights of steps!  (Sometimes she would take things that she wasn't told to, such as hot dogs and ice cream cones from unsuspecting kids.  I would hear screaming or crying and know she had struck again!)

She stole quit a bit of food in her life, including entire half hams, a pan of cookie bars, pizza and a lot of a 40 pound bag of dog food disappeared--but the most memorable time was when we were staying at my brother and sister in law Mary's home around Christmas.  Mary and I spent late into the night baking and decorating cookies.  I always had my door cracked open so "Windi" could go get a drink.  Well, she came walking back in and laid down the next morning.  Pretty slick, until I noticed she had sprinkles all down her chest and so did "Robbie" their dog.  I darted out to the kitchen to find everything within doggie reach gone... 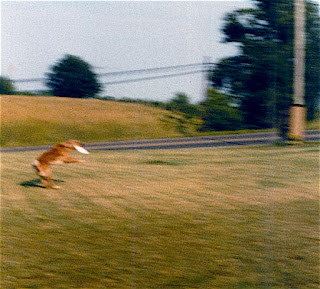 As long as her hips held out, she was allowed to play with frisbees.

One of the movies we worked on was "Out On A Limb" with Shirley MacLaine.  The lead actor quit mid-shoot and I can understand.  All "Windi" and I had to do was walk on the beach and play Frisbee.  We did it in one take and were relaxing while the crew snuck her chicken breasts under the table.  A few minutes later I was called to the director who asked me to do it again because Miss MacLaine felt the dog catching frisbees was upstaging her.  Duh.  So I had to intentionally throw badly so "Windi" couldn't catch them.  I was seething and "Windi" confused at why I made her look stupid.  We have the  DVD (no small feat considering that the movie sucked---I fast forwarded to my spot and never watched past it!)  BTW, Miss MacLaine had a huge bus dressing room and a chauffered limo to take her home... three houses down the street from where we were shooting.  I swear I saw it myself! 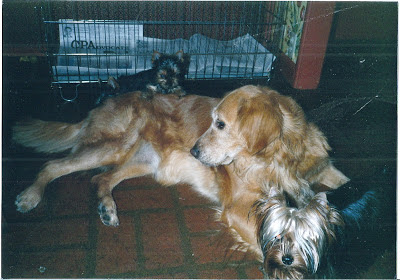 "Windi" hanging out in Barb's kitchen.  She was very tolerant of puppies.

Back home in Ohio, "Windi" helped me train obedience classes and entertained where she could.  She spent a lot of time with Barb Alexander who took care of her while I was at work.  "Windi" and Barb became fast friends.  I remember a rare time when I was annoyed and sent "Windi" to our wing down the hall from the kitchen.  Barb had a toy dog wall crate in that hall and one of the doors on the second level was open.  Her command for entering crates (I was thinking our wing was sorta the crate) was "KENNEL."  Instead of running down the hall, she jumped up into that wall crate, filling it up.  We were lucky there was a second door because there was no turning around and Barb and I were so startled it took us a second to think!

There were lots of funny memories of "Windi" but hands down the funniest was this one:  (I've had to pull over if I was driving and thinking of this because of the tears laughing.)

Barb's daughter Janet was dating a very classy fellow that liked dogs, but wasn't terribly used to big dogs.  Janet loves dogs and she wanted me to show off "Windi" for him.  I did the regular stuff and someone suggested that I should have "Windi" retrieve this gentleman (who was dressed for dinner at the club later on and very dapper in pressed khakis and a jacket.)  Normally, she would gently take someone by the hand and bring them to me.  But, he wasn't sure what to do and he didn't really offer his hand right away.  So she grabbed the next best, closest thing she could--his crotch.  (Enter falling tears of laughter.)

She was puzzled, he was shocked, I was mortified and everyone else was laughing.  Well, after the initial disbelief, I knew I had to act fast (calling her was out of the question or she would bring him to me. ) He was calmly asking for assistance, so I walked over and delicately unclamped her.  Unfortunately, she did leave a drool ring, which I hope disappeared before the dinner. 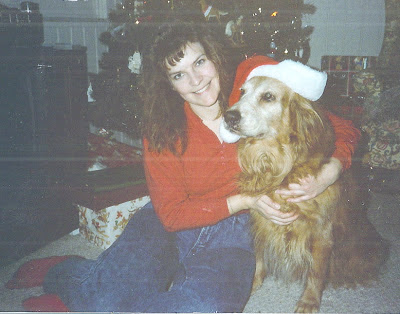 Our last Christmas.  She hated wearing stuff, but would do it anyway.

I have many more stories, but I'll save them for another day.  "Windi" struggled a couple years with lymphoma.  I periodically had her on steroids to slow it down.  Even though her hips were a level one (mild) dysplasia, it got harder for her to get up and around.  One day Barb and I knew it was time and we did the kindest, hardest thing I've ever done (she came for moral support bless her heart.)  In 10 short years, she was gone and though I've had other Goldens (even ones I adored) there was never another "Windi."

Many of you readers have known me long enough to remember her.  If you have any stories about her, please share:)  It would mean a lot to me!  (There is one below already.)

Good morning Gale. I read your article today about our wonderful friend Windi.
I'd not mourned for her in quite a while, but reading your words brought tears to my eyes once again.
She was an unbelievable intelligent girl for sure. I remember coming home from work taking her over to Lowell's house to frisbee with Betsy almost every night.
I do have one personal thing to add to your next piece if you choose to include it.
Remember after you moved back to Ohio and lived off of 315? You asked me if I'd like to see her. It had been a couple of years I think since I'd come back to Ohio myself.
She wined continuously and stayed by my feet the whole time we talked. I could feel her love so strong as she felt the strokes of my hand.
I'll never forget that visit as long as I live on this earth. I just hope that dogs do go to heaven as I know she'll be waiting for me wondering what took me so long.
Thanks for the wonderful memories of my friend Windi!!