Well, we had some time to rehearse alright, but not because of my request.  The house was disgusting and the cast/crew had made some comments, even sending someone to the store to get cleaning supplies.  The girls (of course) came back with rubber gloves and disinfected what they could, plus had to do the dishes, etc.  Well, the owners (and the subjects of this episode) overheard comments and were offended that anyone would find their home abnormally dirty.  (Think "Hoarder" episodes... hey, the flies were going out the doors...)  They threatened to throw everybody out.   (Darn, they didn't!)

So, trying to rehearse was a nightmare between the cleaning crew, arguing and who would have a better sense of smell than a human???  You got it!  The dogs were so distracted with the place they couldn't focus for more than a second.  Plus, I saw the original dog scratching... I pulled my gang out and we practiced in the motor-home, applying a generous amount of flea protection to the dogs.  I also appreciated being able to keep an eye on my Range Rover to make sure it hadn't wound up on blocks... such was the neighborhood.

After observing the situation, most of us were having trouble believing the storyline...  We started shooting mid-afternoon while the production company unhappily arranged for a second night in the hotel and the per-diems.  We weren't starving, because "Ann" was smart and put stuff in her fridge.  The three of us went through two pounds of M & M's we nicknamed "stress tabs."

One scene, the director, me, an actress and the cameraman were in the bathroom getting a shot of the dog coming through the door to the shower.  (I was actually getting the dog to come to me, so I was in the shower with the actress portraying the mother, fully dressed with shoes on and still grossed out even though it got bleached!)  The poor cameraman had to sit on the toilet because the director was in the only other out of range spot.  I said to the cameraman, "That has got to be against union rules."  He said, "If not, it's at least against the laws of humanity!"

This whole shoot was like an out-of-body experience in a dream you can't wake up from.  The main dog's owner we'll call "Bertha" decided she should be paid a trainer's fee because we needed her help sometimes.  That wasn't in the budget, but she was ticked and I was frazzled, so I believe I gave her a cut of my ever-dwindling profit to stop her from walking off with her dog in the middle of the shoot.  They weren't going to give her money as they didn't even like her.   I was asked to tell her to chill or leave the set more than once.

Thankfully, "Ann" was calm and helped me through this, helping to figure out how to "cheat" some shots and keeping "Bertha" at bay.  When we were finished, we were so drained we just grabbed stuff and left.  I needed to get the other collie home (she did get some face time though!)  Of course, I left two brand new personalized director's chairs in that backyard, a cooler and who knows what else.

I hadn't talked to the sitter in a few hours, so decided to stop at a pay-phone to save some money and call.  Well, it turns out that two year old Audra had been helping herself to the cupboard while the sitter was on the phone.  She grabbed a box of red jello (which was a fluke we even had it, but it came with free alphabet cookie cutters someone gave her for Christmas.)  She ripped open the box and spilled the powder in the center of our living room on the pale silver carpet.

Not a big deal, except instead of vacuuming it up, the sitter claimed they didn't want to ruin my "sweeper" so they, "mopped it up as best they could."  I let that process a second and then I said, "what do you mean by 'mopped it up?'  You added water?????"  Take a guess.

I came home to an enormous red spot in the center of the front room that had already dried.  I tried everything and then had two cleaning companies come out that specialized in stains.  This cost a couple hundred, not to mention it didn't work.  You couldn't cover it with furniture, so the only option was to buy new carpeting for the living and dining rooms, plus at least the hallway because it was the same carpet throughout and nothing new would match exactly due to the age of the carpet.

Well, it was a rental and I wasn't doing that even if I could afford it.  We might get dinged on the carpet (though legally landlords are supposed to paint and change the carpet) when we moved, but it wouldn't be as much as replacing it.  So, I cut an organically shaped piece out of a closet and put in a nearly matching carpet sample there.  I took the piece to the living room and cut out the stain and used dog clippers or something to lower the pile and blend it in.  If you didn't know it was there, you couldn't easily tell.

That would be the end of the story, except when I got the final check from the company, I had forgotten per diems with some companies are merely advances and not extra pay (though I usually got this in addition.)  So, backing out the per diems and paying for the dogs, "Ann" and "Bertha" left me with nearly nothing, nothing or in the hole.  Can't remember.  Certainly after the carpet, way in the hole.

My wise brother Jeff summed it up by saying, "Well, now you know this is something you don't want to do anymore."  I gave it a try and learned from it.  So mistakes are often kind of helpful in a painful way.  I could focus on another direction.  The show came on and it looked okay, but I never accepted another assignment!

Rest In Peace Sophie... our Rhode Island Red hen died right after I finished Part One.  She was fine (at least to me) in the yard a few minutes before.  We are now back to the original nine hens. --GW-T 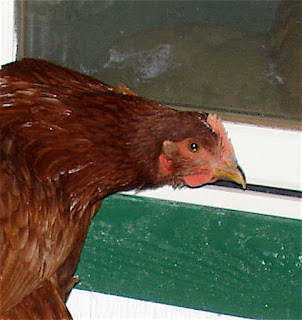 As you know nothing comes easy. What an experience.
Cher Sunray Gardens
Goldenray Yorkies