I'm A Low Tech Girl In A High Tech World!

I give up.  I never thought I would become an old "fuddy duddy" but I have to just admit defeat and move on.  Although I used to think I was half-way intelligent,  the evidence is proving otherwise.  Other folks can keep up with the Jones' for me.  The last straw was my new wi-fi blu-ray dvd player.  (Yes, I am just now getting one...) 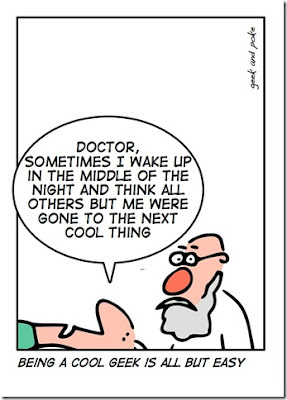 It started decades ago.  I was kinda slow hopping onto the computer train at Ohio State (back when one carried a huge stack of punch cards for programming class.)  I hated it and dropped the class. I learned to use a terminal while editing for the "Lantern" newspaper.  The "main frame" took up a whole room back then.  I could never program my VCR or "BetaMax."  One gadget after another has been coming out over the years that is supposed to make life easier, but it either doesn't, or it's so hard it's not worth it.  A popular response to my whining is "Read the manual!"  Really???  Can anyone do that?  My eyes glaze over on page 3.  It is either stupid simple, doesn't apply to my issue or is full of jargon.

My Jeep has lots of bells and whistles, some I still may not know about.  I use the auto windshield wipers and lights simply because it came set that way from the factory.   I absolutely hated my "smart" phone because I thought it was dumb.  They've made cell phones so small I can't even read the screen, forget surfing the 'net!  I just got a new phone that is basic and it does great.  I text and take calls, period.  Have you ever tried using 'voice commands' successfully?  What a joke!  If I could've successfully programmed our weather radio, we might have been warned about the tornado before it hit our house a couple years ago.  Instead, it kept going off in the middle of the night with warnings for Indiana so I yanked the cord a few days before our tornado...

Over the years I had to improve computer skills in order to be employed.  I still know very little, but at one time I did have a website for our dogs that I worked on quite a bit.  I forget all about HTML commands now.  (Good thing my friend Cher is great at that!)  We have wi-fi and bluetooth (whatever that is) printers that we took forever getting around to setting up.  I tried connecting my bluetooth phone to my bluetooth computer and gave up.  The only software I was ever proficient as was Word, Microsoft Publisher and WordPerfect.  I still am not great at playing "Angry Birds!"  I have an iMac that I love, but surely don't use anywhere near it's potential.  Having one also presents loads of problems with stuff only compatible to PCs.  I'd love to drop the house phone line, but Mark still has to fax and I spent too much effort trying to figure out how to do it through the internet.  It's always something!

I love to craft, but it's low tech also.  I have a digital sewing machine with a dozen feet and tons of stitches.  I use forward/reverse straight stitches and one foot.  All of my appliances have gadgetry, but all I need are on and off buttons.  We hated our home security system.  Back in the day it was a pain and it's embarrassing to have the cops come at 5:30 a.m. (along with a hook 'n ladder and medic squad) all because one of the window sensors kept beeping and we tried to disconnect it.  Duh!  We set a special alarm (or tried) when we were going to be gone a few days and as we were pulling out of the driveway the house siren sounded.  A lot has to go wrong before it gets to that point...and it did.

However,  the most exasperating thing ever has got to be home "entertainment."  One Christmas a long time ago, I bought Mark DirectTv with TiVo.  He said we'd never use it, but other than a few glitches, it turned out to be the only thing we do use!  (Of course the DirectTv install guy didn't even bother to hook up the remotes--Mark came unglued and made the guy drive back here.  I paid $70 for them to install it, not drop it off.)  I bought into their "Total Home" mess and never got it figured out (service guy again long gone.)  It's supposed to be the best thing since sliced bread.  I just cancelled it.

Our wireless router of eightish years died and it took three tries for Centurylink to send the right one.  Then we had to hook it up a "non-standard" way.  Took the tech support guy an hour to figure it out.  Now that it's working, I hooked up with moderate success the dvd player and I can indeed play dvds.  But although it says the internet is connected, I don't know how to stream video to my tv (a 4 year old Sony flatscreen) from websites and not just youtube.  If it does for one, surely I can hook up any website?  BUT HOW????????

On another note, when you 'upgrade' gadgets, what do you do with the power cords and cables, etc????  We stick them in a drawer (okay a couple drawers and a basket.)  We will never use them again will we???  I wouldn't even know what they were used with. 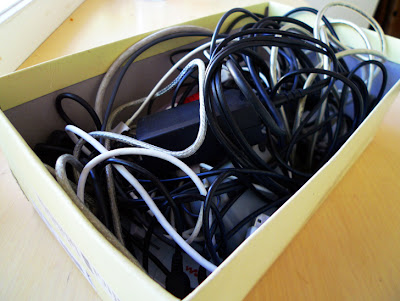 This isn't ours, but just like it.  Does everyone have this mess?

Well, enough of this, I think I will take a low-tech nap:)

I have to laugh Gale. It's just become too complicated to go the new easy way. LOL Oh well, give me less buttons and it's less things to break and have to have repaired by someone else.
Cher Sunray Gardens
Goldenray Yorkies

Aw, this was a really nice post. In idea I would like to put in writing like this additionally – taking time and actual effort to make a very good article… but what can I say… I procrastinate alot and by no means seem to get something done.