Rockin' At The Hall Of Fame!

(This was accidentally deleted and all comments.  So sorry if you've already read it.  It is way too easy to delete on this new software and there is no easy way to retrieve it.  As always, enjoy and tell a friend or two!
Stay cool, Gale) 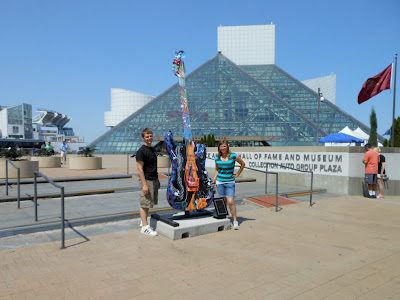 Taylor and Audra in front of the Rock and Roll Hall of Fame.  At left is Brown's stadium.

I promised Audra and Taylor a long time ago that we'd go the Rock and Roll Hall of Fame and Sunday was the day.  Fortunately, most of the drive was nice, dry and sunny.  Not as much traffic as I expected either for a holiday (sort of) weekend.  At Mark's suggestion, we stopped at White Castle for a quick meal of breakfast sliders (bacon or sausage, egg and cheese sandwiches.)  They crack open real eggs and the sandwiches are surprisingly, pretty good and not greasy.

Though a two and a half hour drive, the Hall of Fame is easy to get to right at the edge of Lake Erie.  This isn't a cheap venture though, parking in a tiny lot was $10 for starters.  Tickets are $22 each unless you fit in a stroller.  It's non-profit, so I guess somebody has to pay for the upkeep (and the not the zillionaires in the music industry...who probably get in free.)  The building is an interesting pyramid shape in glass with lots of colorful guitars lining the sidewalk.  I don't have many photos because you aren't allowed to take any of the exhibits,  just outside and in the atrium. 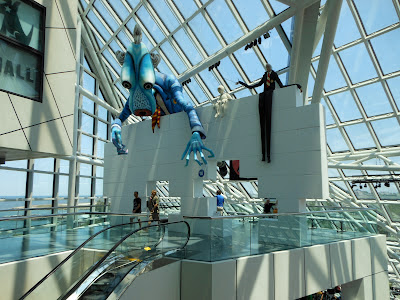 We (at least me) didn't have many pre-conceived notions of what it would be like.  It was really hard to wrap my brain around the place as it isn't organized in a way my OCD thought process would've done it.  Yes, it is a rock music mecca and it's probably just a mirror of that crazy world.  It was noisy to me, with sound bytes at nearby interactive exhibits, background music, tour guides talking, folks chattering, etc.

The floor plan was a bit jumbled, though it looks organized in the exhibit guide.  They start by grouping artists (not all hall of fame members) chronologically, but that is hard due to so many who  crossed several decades.  Then, in the middle of an aisle, there is this random Jimi Hendrix hall leading to the Beatles and the Stones, then back to history again.  Maybe we should've taken the formal tour and it might have made more sense.  But I doubt it and it would have taken 5-6 hours including the long movies.  If you have a favorite artist, it is possible you could be looking several places to find artifacts.

I also had to keep in mind this wasn't the music hall of fame, but just rock.  Hard when they are displaying Elvis' gospel album of the year grammy award...  I also found it hard to associate some of the exhibits as real (though some were copies).  Michael Jackson's real "Thriller" grammy and wardrobe was featured along with his sequin glove. 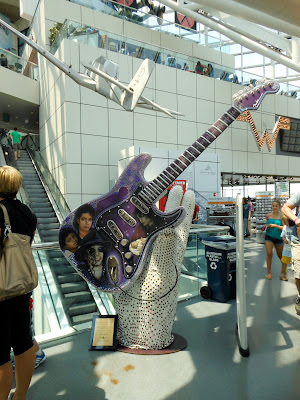 Michael Jackson tribute outside of gift shop.  They charge folks $25 to have a picture taken with it.  Well, they take it for free, but if you want it, it's $25. LOL!

Overall, it was enjoyable and interesting.  I think though, it borders on a cluttery archive instead of a museum.  For instance, who really cares about a copy of so and so's dry cleaning receipt???  Photocopies of hand written lyrics???  That stuff could be in a separate area and alphabetized or something.  Wading through it got distracting.  The Grateful Dead was the feature and there were several areas with their stuff.  Since none of us are "Dead Heads," it didn't really interest us.

Some of the memorable exhibits, besides Michael Jackson's, were John Lennon's piano where he wrote "Imagine" and his glasses, Elvis' Lincoln (that I missed because I was looking at the outfit next to it and his grammy,) and loads of costumes.  I noticed how small most of those folks were/are, but then I had a duh moment when I realized some costumes were tucked in behind the hanger.  There were some exhibits which were kinda creepy like pieces of Otis Redding's plane crash, pipes belonging to Grateful Dead members and Jimi Hendrix's sofa that was really nasty looking, but Taylor thinks pretty valuable if one were to vacuum it for the drugs... maybe that could offset the ticket prices???  The grammy trophies were pretty ordinary, except for the fact it was a grammy that I can only dream about getting:)  I guess I was thinking they were real gold or something, but they were like any you would order at a trophy shop.

After our brief tour, we went over to the Hard Rock a few blocks away.  We had to look hard to not get stuck in a casino parking garage with a $25 fee.  We had a nice lunch, eating like we'd never eaten that day.  Cleveland has dozens of restaurants in the area that are pretty upscale.  Nicer than I remember as a kid.

Well, that's enough for this post.  Hope you enjoyed it and will come back for another visit!  Stay cool!

For more info and directions, go to rockhall.com.

Hey had to be fun to go to. I've said one of these days I would go but you know how time always gets away from us. Nice day to spend with the kids though with something that interested all of you.