Gale Does "Dallas" & Other Guilty Pleasures

I was beginning to mourn the end of the TV season and the fact that the summer fill-in shows are usually awful.  My favorite shows right now are "Mad Men" (the original "Sex and the City" or better yet call it "Sex in the 60's!") and some of the History channel antique shows I watch with the family.

I'm thankful for reruns of "2 Broke Girls" that I missed the first go-round.  Though really racey for an 8:00 pm slot, it is hilarious!  The humor, puns and sarcasm are rapid-fire and it's produced by the fellow who did "Sex and the City."  The main premise is a dark-haired permanently broke waitress meets a recently broke blond heiress (her father went to jail for his ponzi scheme) who becomes a waitress at the same diner.  This heiress brings along her pet to live with them:  a horse named Chestnut that lives on their patio.  The girls are saving up to open their own cupcake shop, but many things stop them from saving very much.  There is a tally at the end of every episode and I think they are ahead perhaps $150.

For you young'uns... way back in the late '70s and 80's TV was limited to ABC, CBS, NBC and PBS. There were some large local stations, but not zillions of channels we have nowadays.  So, when a show was popular... pretty much everyone watched it.  The biggest night was Friday.  For young adults and older we had the "triple play" of "Knight Rider," "Dallas," and "Falcon Crest."  (I wasn't much of a Falcon Crest fan.)  Folks would meet at each other's homes or go out to bars to watch TV together.  You would plan your night around this.  (You couldn't record shows just yet.)

"Dallas" was a huge hit and it was a worldwide event to find out "who shot JR."  It was known as the "the shot heard 'round the world."  The show was about the oil wealthy Ewing family who lived on a ranch called "South Fork."  It was unabashedly flashy, dramatic and hokey, with huge plot issues that one had to overlook (mostly in the relationship department.)  The hardest issue to accept had to be when brother Bobby died and then a season or two later he came back because it was "only a dream."  He just shows up in a season opener in the famous "shower scene."  Boy, they expected a lot out of the audience!

Like many bad substances, "Dallas" was addictive.  I usually don't watch reruns of anything, but when the series came to TNT, I watched it every day while making the kids' lunch.  (There was a 10 year break though, so that's my excuse.)  There was comfort in the predictable...every party they had involved a fight with someone winding up in the pool--we would just try to guess who would be next.  They had the Oil Barron's Ball for glamour, nearly always including a "shocking reveal" to the guests.  They almost lost "South Fork" every season.  JR (black hat) and Bobby (white hat) fought continuously over Ewing Oil.

Conveniently, JR and Bobby both had sons to carry on the tradition because "Dallas" has 12 new episodes on TNT at 10 p.m. on Wednesdays.  The stars are the grown up boys with the old Bobby, JR, Sue Ellen, Cliff, Ray and Lucy coming and going during the show.  But now it has a young cast for the next generation which are of course all gorgeous and everything is updated technically.  (I still remember JR carrying a portable phone the size of a football.  Very hip then.)  There is still the same ole conniving, fighting, cheating and treachery of the original series though!


Here is a look at the main cast:  (taken from their webpage) 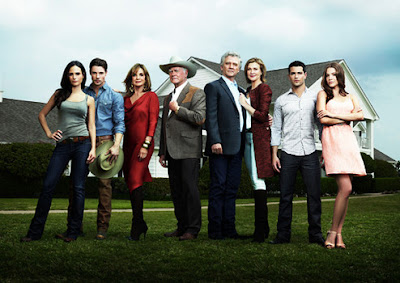 I just read that TNT renewed it for next season with 15 episodes, so you'd better hurry and catch up!

Hey girl I'm watching what you are watching. Two Broke Girls is very funny and the new Dallas is gripping already, just like the old days. Remember we were young once. :)
Cher Sunray Gardens
Goldenray Yorkies

And Dallas has a great opening instrumental theme!

Hey Gale, Always like your posts. I haven't seen any of those shows, but I like hearing about other shows that people like to watch. I'll have to give it a try.