I have been participating, in varying intensities,  in the "Dog Show Game" since 1981.  Some folks call it a sport, but those of us on the "inside" call it a game.  I have no idea why, because it's a game that even if you win, you lose.  You think I'm kidding, but I'm not. 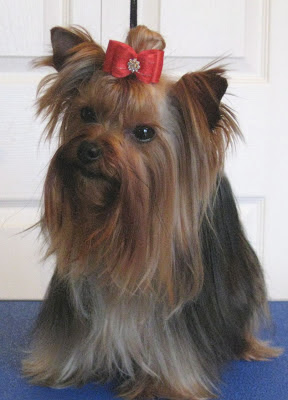 This is Carrie, a spoiled sweet pet and the Chin's best friend.  She is Patrick's daughter.

This is a hobby with short-lived results to say the least.  You can win big one day and lose the very next.  When I say win big, I mean big in bragging rights, because that's about it.  When Mark showed reining horses, he was stressed because he pretty much had to win to be able to afford to keep showing.  He would work at our machine shop, then often catch a plane to meet up with his horse and trainer.  He made a couple of runs, then would hop on the plane and beat it back here to get to work.

We never made big bucks, but often he would win a couple thousand or so (this was in the early '90s) so he could make entries, pay the trainer and support the horse.  He also brought home lovely and valuable bronze or pewter trophies that he could keep!  (In dogs we have had several that we had to pay to add our dog's name to by an engraver, then ship it back the next year to the club to be re-used.)

Well, us dog folks aren't under that stress because we know going into it we are gonna lose a pile of money, effort and time win or lose.  There is no real prize money, though I've gotten a few bucks here and there, not even enough to pay for the entry.  For what you say???

It's definitely an intangible "thrill" if you win, but a really tangible loss either way.  For instance, I don't particularly like to drive hours and hours to go anywhere, much less a dirty old fairgrounds (or worse) for a couple days, then drive back.  The winters are cold, summers sweltering and it rains here in Ohio pretty much whenever you don't want it to.

I rarely do outdoor shows because I don't have a motorhome to lounge in and keep the dogs (and me) cool.  I am not thrilled about port-o-lets and restrooms without soap and often toilet paper.  I usually have barfing dogs to clean up from car sickness and can never find power to use the hair dryer as folks hoard it.  So if there is a wall hand dryer in the restroom, I stick my poor dog's face under it to dry.

You spend a fortune on gas, food, hotels, entries, parking, tolls, supplies and don't give a thought about all the other things you could do with that money.   Specialty shows (for individual breeds) come with airfare, cabs, hotels, $50 dinners, donations, etc.  But we go to meet up with folks we don't see very much and show off our newest dog.  If you don't like to handle your dog in the ring, you can run up a heaping bill with a professional handler.  I always worked for food, travel fare, diet Cokes, whatever.  So, I've handled a variety of breeds for some wonderful folks.  I've shown Chows, Flat-Coated Retrievers, Yorkies, Goldens, Pulik, Shih Tzu, Japanese Chins, Westies, Lhasa Apsos and others. 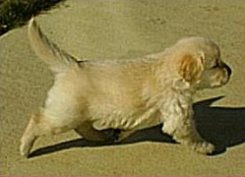 Jordan had stunning movement his whole life.  I would hear strangers commenting on him ringside.

Truth be told, I love the results of grooming a beautiful coat that's to the ground like a Yorkie.  I love it when I actually get a good topknot in that stays put.  But I really don't like grooming under pressure with time/space constraints, people walking by distracting the dog, having the dog act squirrelly because of noise or heat or cold or whatever.  I always, ALWAYS manage to knock over my liquid hair spray on the tiny grooming table and have to grab up the dog.  Cokes frequently get spilled.  What a mess!  I also seem to forget to pack something important and have to beg or improvise.

So, you go into the ring and your dog acts up and you are done for... or "viola" you win!  You collect your ribbon costing well under a buck and thank the judge profusely!  If you are really lucky, you may win a trinket or two, but mostly nothing or nothing you want.  (Author's note:  I got a comment from my friend Nanette reminding me also of how everyone is your friend when you lose, but folks can turn on you in an instant when you win...see comments.)

Then finally, you earn enough purple ribbons to call your dog a champion.  It's an exciting time.  But, since most of us breed to get the next new show dog, we don't use our males for outside stud services or sell show puppies.  There is way too much bother in that to be worth it.  Trust me.

So, why do I do it?  Dunno.  Will I keep on doing it?  Yep, probably now and then the rest of my life.  There is a thrill to see a lovely dog sweeping around the ring and watching the right one win.  (That does happen sometimes.)  If you love dogs and have never been to a show, look one up in your area.  Try infodog.com and click on show schedules.  You will see many beautiful dogs!


Here is a handful of "blasts from my past."

One of the main reasons to show dogs is to have gorgeous puppies and smell lots of "puppy breath!"  Jordan is the one on top of course! 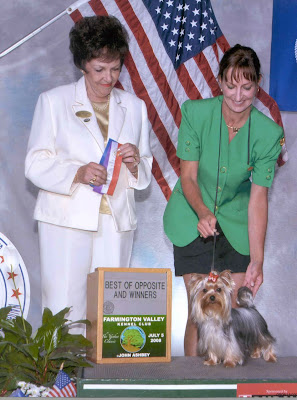 Joy is Carrie's littermate and shown/owned by Sheri Clark. 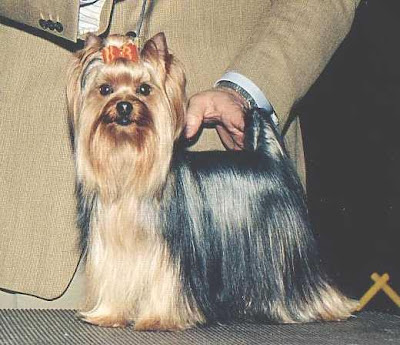 Patrick finished his championship quickly.  One of the easiest dogs to show.  Patrick is Joy & Carrie's dad and co-bred/owned with Barbara Alexander. 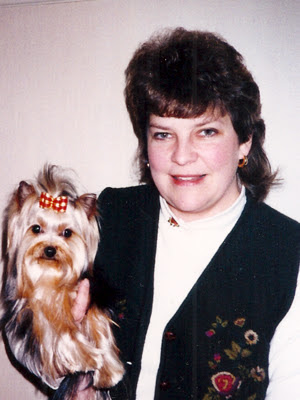 Minnie was my first yorkie, a gift from Barbara Alexander.  She is Patrick's mom. 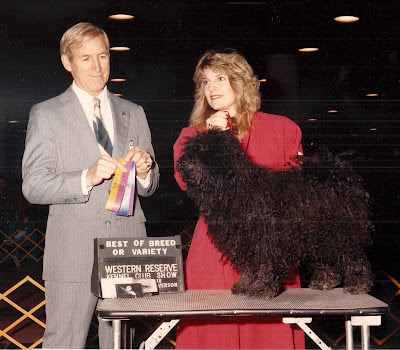 Shee-ra was a puli owned by Rick Burch. 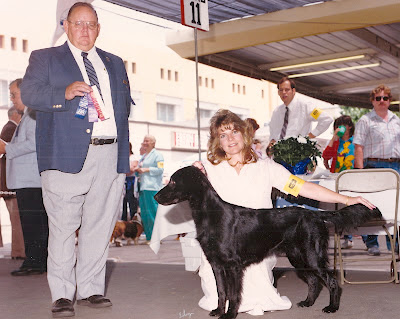 Kate was owned by Pat Siehr and Judy Dexter. 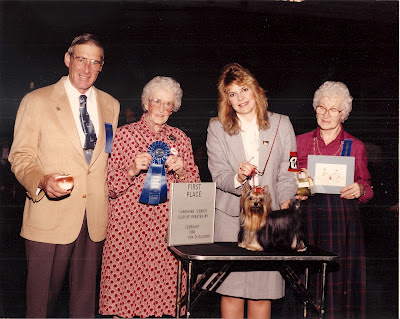 Max was owned by Barbara Alexander. 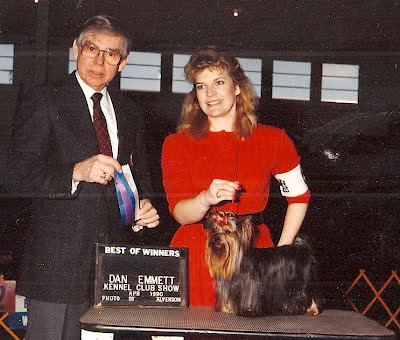 Kissy was one of my very favorites and owned by Barbara Alexander.

It's finally raining!  Yeah!  Since I can't mow, I'd better bathe a couple dogs!

Until next time,
Gale
Posted by The Darby Creek Diaries at 10:16:00 PM

So many folks are having problems commenting. I am going to have to look into this more! Here's from Barb at Anderleigh:Being a yorkie breeder/exhibitor for so many years I just loved your blog on showing. All SO true!!!! And the pictures below, I know why you did that and it was a nice gesture, but it must have been because I had showed concern for Carrie. Well it certainly wasn't a big thing, just thought she might be the underdog. I think when I saw the picture of Truly in the beautiful satin round bed and Carrie was on a towel beside her, it just looked sad. I did enjoy those pictures of our yorkies and hope some of my old friends might have seen them. What fun we had and the stories we could tell and the disasters we met (remember Harvey coughing (unmistakenly kennel cough) right before you were going in the ring. I really miss those good old days, and with your busy life now we see less of each other.

Here's one from Nanette, Tru the Chin's breeder who has a multi-BIS dog (Tru's cousin):

OMG this somes up my whole life with this edition, Now that my dog has many BIS ,I am loved and Hated at the same time . This must mean now its time to take the needle out of my arm an live real life . Yea like what is that with out a dog show . oh well !!!!!!