I can honestly say we have thousands of pets.  Even hundreds of thousands.  You've read about some of our "normal" pets (dogs, chickens), but we also have an ancient Amazon parrot, a pair of lovebirds and last, but certainly not least... in fact most, are honey bees.

My hubby Mark has always been fascinated by bees.   He has friends who were professional beekeepers and many years ago, they asked Mark to design and manufacture "queen bee artificial inseminators"  at our machine shop.  It looks a little like a microscope, but with a tiny needle.  Frankly, it looks painful to me!  It worked great, but there isn't a huge market for such things.  This was for someone who needed specific bees bred instead of letting the queen run amock. 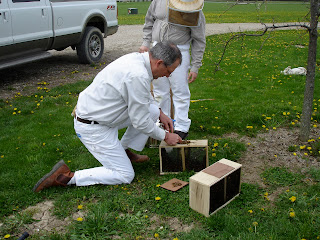 Mark letting loose some newbies (ummm... new bees!) a few years ago.  He wanted Taylor to be his assistant, but that didn't last.  Note Mark isn't wearing the bonnet or gloves.  He really isn't afraid of them, even though he has been stung many times.
Several years ago Mark decided to plant an orchard on our 5ish acres.  The trees that survived (at least awhile, they tend to be annuals at our place) weren't producing fruit.   He "needed" bees.  (Since then, the bees have done a good job pollinating, but most of the trees have problems or we get a late frost, so still not much fruit.)   Soon we had 15ish towers in our yard, with several more parked on friends' properties.  He started breeding queens and "nucs" (starter hives) selling some, which was great.  I read somewhere a by-product of beekeeping is honey.  I guess we have 1,500 pounds of it, but I've never seen it as he keeps giving it back to them.  No matter, I don't even like honey.  I would like beeswax to make candles and things, but Mark doesn't want to wear the poor little critters out making comb.  (I at least get eggs everyday from my girls, so there!  Who has the most practical pets???) 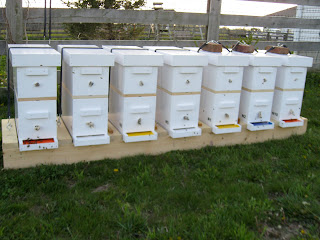 "Nuc" hives
Living with bees has taken some getting used to.  We have had several run-ins with them and we always lose.  Taylor wasn't even mowing near a hive and got stung on the forehead between his eyes.  He looked like an Avatar or something from "Star Wars."  Mark finally did away the queen of the hive that "guarded" the entrance to the workshop.  I got stung walking in or out and I was going ballistic.    (The queen sets the tone of the hive, so you kill it and replace it with one that has a better personality.  This also goes for a lazy hive.) 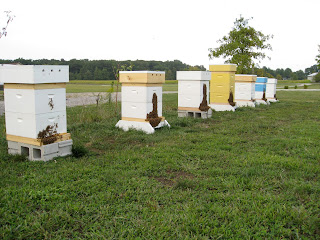 Here are some critters hanging out "on their porch" on a hot summer day.
Most of what I knew about bees came from the "Bee Movie."  Here are the "TOP TEN" things I have learned since then (often the hard way!)


1.  DON'T DRINK AND HIVE.  A couple women stopped by to ask Mark some bee questions.  Apparently they'd had a beer or two.  I looked out the window and saw them dancing in the driveway with Mark trying to shoo the bees away.  LOL!  Only funny, cuz I wasn't out there.  Apparently, the smell of beer (basically fermented bee food) makes them crazy!  Though tempting, you never want to run or slap wildly at them as that just makes them madder.

2.  IT AIN'T EASY BEING QUEEN.  Sure, you get fed the royal jelly, but all you do is lay eggs all day long, then a young'un comes along and kills you or runs you out of Dodge.  Your lifespan at best is two years, mostly shorter.

3.  MALES ARE DISPOSABLE. (I am so tempted to comment further but...)  If a hive runs low on food, the drones are shoved outside and left to die.  Anyone who breeds the queen also dies.  Speaking of dying, any honey bee will try to avoid stinging you because it rips open their abdomen and kills them.     I try to warn them of that when I go by.

4. BEES AREN'T PORTABLE.  If you move their hive more than a foot, you have to move it 5 miles.  This is really a pain as I want some of the hives moved and they would have to be taken off the property, then brought back in a few weeks.  Obviously, that ain't happening.

5. GET USED TO WEEDS ON YOUR LAWN.  My normally well kept lawn has clover and millions of dandelions in the spring (my neighbor's yard as none... he must hate it when I mow and seed his golf course yard!)  I have to wait until I can't stand it to mow and I can't mow until after 5 p.m. (these are union bees and always return to the hive between 5-5:30 like clockwork.)  Otherwise, I would chop up a bunch of Mark's pets.  I have actually stopped when I see a bee and waited for it to leave.  That gets old though and I figured he won't miss one or two...

6. DON'T FEED THE BEES ANYTHING BUT THE BEST.  When starting up a hive, you have to feed it what I call "Bee Soup."  It's just boiled sugar water (a weak simple syrup), but you have to use Domino's or another high end kind because there is a difference.   Quality sugar is better for you and the bees because it's made of "pure cane."  If that isn't on the label front and center, you are actually getting sugar made from beets.  It is worth the few extra cents to get the real stuff.  Unfortunately, Mark was filling our car with 5 pound bags every week.  High fructose corn syrup is horrible for bees also (and us as well.)

7. BEES CAN HAVE "VIBRATION ANXIETY."  Who cares you ask?  Anyone that mows!  I once mowed next to a hive of "bad hombres" who also had this problem  and they came at me with a vengeance.  I have a huge mower to turn around and in my hurry to get away I wound up bumping the hive and really ticked them off.  I jumped off the mower and started undressing as I ran to the house to get help.  They went up my shorts, in my shirt and got "trapped" in my hair.  I lost count at 50 stings.  My hands were swollen like paws.  I was miserable for a week and wanted to murder all of them.  This of course happened when Mark was working out of town, as is my luck.  The first words out of his mouth were, "What did you do?"  I came unglued.

8. THEY BEE-LONG OUTSIDE!  Mark matter of factly informed me that he had just picked up new queens (who come with ladies in waiting), but it was too cold to put them in the hives that day.  He had opened the box for air and sat it on the counter of the half bath with instructions to stay out, or grab what you need with the light off.  My son with selective hearing didn't get the memo.  He goes in turns the light on and when he leaves (as usual) left the light on.  At least he shut the door.  The next thing I know, I open the door and there are bees everywhere, crapping everywhere.  The walls, sink, floor, a mess.  I shut the door (and the light off) because I sure wasn't catching them.  They eventually went back into the box because it was dark.  Why do Mark's "pets" often become my "pests?"

9. BEE-WARE OF "CLEANSING FLIGHTS."  In Ohio, our Winters can be long, but often there will be a "nice" day or two here and there.  Bees don't poop in their hives, so after a few weeks (OMG) they can't hold it anymore.  During these "nice" days, you will see bees everywhere.  Mark will sometimes open a hive to see how it's doing on those days.  He always remembers to wear a hat because he will get pelted with poo!  Another Winter note is they keep warm by flapping their wings.  When the bees nearest the hive opening get cold, they move into the middle and the others rotate outward.  In summer, they sit at the door and flap air into the hive to cool it.

10.  WHEN YOU SEE A SWARM,  DON'T CALL ME!  If things have gone well, hives will divide and swarm to avoid overcrowding.  The workers surround the queen and will often take to a tree.  When this happens, I usually call the out-of-town Mark.  He tells me to go get a box and shake them in, that they will be nice.  Well, I put the box out, but I don't do any shaking.  He has photos of them marching into boxes like soldiers once the queen is in.  I don't hang around to watch.

Just found some photos of the queen bee inseminator in case you were curious...

Well now I've made public my "secret life with bees!"    I hope you laughed and learned a thing or two!

Until next time,
Gale
Posted by The Darby Creek Diaries at 10:03:00 PM

First this was very interesting to read and I read every word. Second it was too funny and yes I can say that also since I wasn't there and part of a few of those bee parties. :)
Cher Sunray Gardens
Goldenray Yorkies

Thanks so much! If we can ever afford an extractor that suits Mark, you will have some homegrown honey:)

I LOVE Bee Movie! My son had me watch it last year as I am a Nazi about not killing any bugs around here....he said, they made this movie about you! (And yes, we can learn from the bees....high fructose corn syrup and what to do with the males....preying mantises also have some lessons ;-)

I've always thought I'd like to try beekeeping. I'd have to have several acres more than I have now, but the idea is always in the back of my mind. Thanks for sharing all the info.

Wow! I just learned from a co-worker that she does the bee thing, too! She was telling me about the box thing, that the folks call her and she puts them in a freakin box!?
You must be a saint to put up with all that. Dandelions, mowing on bees' schedules, and HE goes out of town??
Uh, that ain't happenin around here, cuz!!

Well, the out-of-town part is for work. There isn't much construction in Ohio. He hates it, but he can't just sit here and go broke. But, the rest of it is so true!
The bees have been polite this year and I don't know why. Not going to question it!