"Cheep" Thrills: There's a Duck in my Shower!

Well, the "Dog Days" of summer are here, but frankly, my dogs hate them.  They have to be shoved out the door to potty, then stand on the top step 30 seconds later begging to come in.
Thursday Audra and I made a bizarre trip to pick up $12 worth of poultry, spending 3 hours traveling there and 45 mins. coming home.  Long boring story of multiple bad directions, non-working internet phone and 181.2 miles of driving.  I wish I would've taken my Jeep with navigation, but instead, trying to save gas took Audra's Escape.  We hadn't signed up for the navigation yet.  Didn't think I needed it.  Go figure.


If I hadn't promised someone I'd bring them home some hens, I would've skipped the whole thing.  It's the end of the season and some breeds of chicks are as scarce as hen's teeth...didn't want to risk it.  When Olga turned into James Brown he found a vegetarian home, but it left me short on hens.
I am slowly getting over the whole thing and trying to just enjoy the new girls.  Mark had asked me why I hadn't gotten Barred Rocks or some other "normal" chickens like he raised as a kid.  So I decided to get one of some heritage breeds he "liked" and then came the duck...never take kids with you to shop.  Will I ever learn?  Even worse is Mark said he liked White Rocks not Barred...Audra said he loved Rhode Island Reds and he denied that.  You can please some of the people some of the time... he was especially NOT thrilled with the duck.
From L-R are our new girls:  Rocks Anne (Plymouth Barred Rock), Daisy Aflac (Pekin Duck), Emma (Buff Orphington) and Sophie (Rhode Island Red.)  This completes the coop--NO MORE!
They are doing great, though the duck is going to take some getting used to. 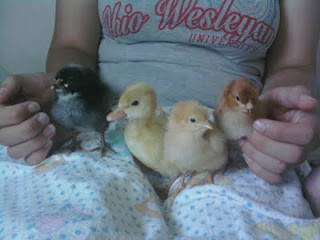 I've been reading quite a lot of Chick Lit lately and now I find out that ducklings can be raised with chicks as long as you use different bedding and eventually different food.  They are also messy eaters.  This isn't real practical if you only have one heat lamp and only want to clean one pen.  They are living in my soon to be gutted master bathroom shower.  I've been wanting a tub in there forever and so we really didn't use that room except for whelping litters.  The shower works great.  Hung the heat lamp on the showerhead and put newspaper on floor.  Added a baby gate and bingo, a washable pen! 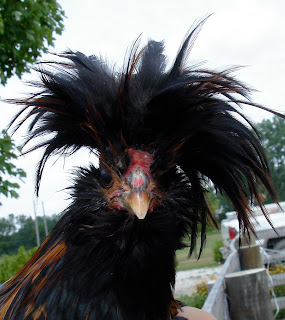 Olga/James Brown- Gone, but not forgotten.
As for the older gals, we miss Olga/James Brown, but I don't think they do.  He is doing great at a friend's mini-farm.  Gloria the Maran seems to have taken charge here.  Here are some pics of our nearly finished "Crazy Coop."  Mark and Taylor did a great job.  Audra and I are the decorators. 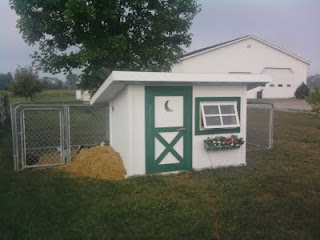 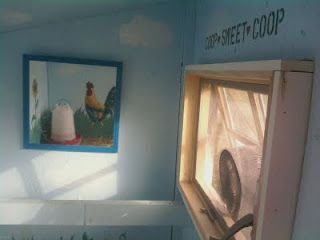 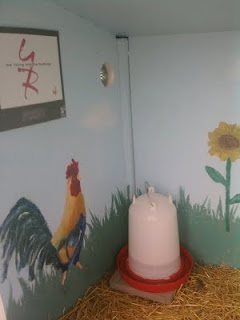 Note:  Girls are watching "The Young & Roosterless" on a Phony TV--I'm installing a satellite shortly with Main-Dish Network!  Audra did all of the figure painting--I just did the walls, TV and stenciling.  The curtains are sitting in the house because I bought the wrong rod. 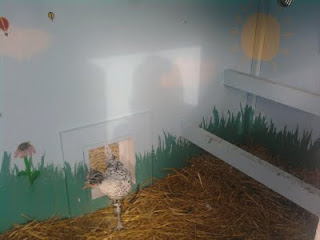 Isabella coming in to visit.  The nesting boxes have yet to be installed.
Well, that about does it!  Stop by anytime!  Talk to you in a few days!

Wow! YOu are incredibly talented painter! Those chickens are very lucky to have such fancy digs! I have always wanted a chicken coop, but I know nothing about them and it gets too cold here, I think!
Did you say yours go in your house? In the master bath? That's incredible!!

Thanks so much! I have my next surgery day after tomorrow. I will put up two articles that are unfinished for about 48 hrs. The convenience store is raw. looks too caustic to be real funny. The driving one I have reduced over a low flame is better than before, but I am unhappy with it. Make any comment that would help the poor lame things and any you would like on any of the others You tell these stories so well, I want to go get a duck, but I'm pet poor already. Any comments dan_gist@yahoo.com I owe you big. dan the curmudgeon

Glad to know you like the rooster, flowers and etc. that I painted. =)